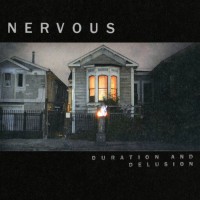 Nervous play a brand of what some might call "Noise rock," a genre term so broad and puerile that it could accurately describe most rock music, an avalanche, an erupting volcano, or even a mountain spontaneously exploding. Anyhow, the music onÂ Duration and Delusion errs a little closer to the post hardcore made popular by Dischord Records in the 90s. Think Faraquet without the time signature flourishes or Bluetip with some of the sludge cleaned off. This EP finds Nervous plugging into a well established sound while sharpening their own sense of songwriting.

"The Future" and "Lapse" start things off with abrasive speed and unbridled aggression. It's the type of sonic weight you'd expect to hear pushed out and bouncing around concrete walls at a hardcore basement show. The tracks start and finish quickly, leaving little room for nonsense or needless finesse. Wisely, the band decides to stretch themselves on "Breathing & Choking," which sees the band starting off familiarly, but slowing down during the song's midsection. The deliberately drawn out track is the sound of a band realizing that they can be just as caustic without speed or constant abrasion.Â

The band take a similar approach on "Nostalgia & Expiration," a nearly four minute song where the band systematically displays all of their strengths cleanly and matter of factly. A band playing a genre of music spearheaded in the 90s writing a song called "Nostalgia & Expiration" might seem wrongheaded or blithely ironic, but it doesn't really matter in the end as Nervous are clearly on the top of their game here. As a whole, the EP doesn't sport the type of aggression that'll put the listener through the wringer nor the wry, coy lyricism that'll separate themselves from similarly minded bands. However, it does make a case for a band with the chops to pull something off worth witnessing in the future.

Warn the Duke: Ghost Be Gone