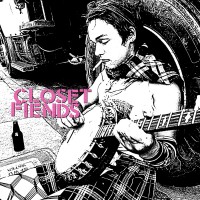 Sam Sadowski aka Closet Fiends is a homeless musician living in the streets of San Francisco who was discovered online by Sturgeon of Leftover Crack and then tracked down by him and Fat Mike. If you follow Fat Mike on Instagram or Twitter you would have seen him documenting Sam in the studio recording her very first and very brutal (in a positive way) EP.

Armed with an acoustic guitar sometimes with a harmonica too and a banjo, Closet Fiendsâ€™ draws influences for this five-song release from the anarcho/crust and folk punk ilk. The instrumentation in the songs definitely bring to mind pre-Reinventing Axl Rose era Against Me! and even Johnny Hobo and The Freight Trains or Ramshackle Glory, mixed with crusty, melodic vocals. In â€œBed to Medicineâ€ Sam plays the guitar chords to the song with fills that follow the melody as she throatily shouts the lyrics. The melody itself is beautiful and has some characteristics of a lullaby â€“ a very melancholy lullaby. Though the guitar work is really creative, it is not played perfectly. You can hear a few instances of buzzing from the strings as they are played, but in this case that is more than okay. These â€œmistakesâ€ only add the to the character, authenticity, and honesty that this whole release portrays.

I cannot stress how wonderfully dark the lyrics are in these songs, but theyâ€™re not only that. They are so unforgivingly provocative, yet still show a sense of vulnerability. And she portrays these feelings and stories through with extremely vivid imagery â€“ sometimes directly and sometimes metaphorically. Some of the best examples of how dim and up front her lyrics can get is in the song â€œBan Ambulancesâ€ where she sings, â€œIf he hands you an aspirin and heâ€™s smiling its poisonâ€ and â€œThat time you woke up in a hospital/Discovered that you were molested while you were unconscious/And those who have power are often the weakest/Just like those fuckers who believe in Jesus.â€ Iâ€™m sure lot of punk musicians today would kill to be able to come up with those kinds of lyrics.

Hopefully, we will here more music from Closet Fiends in the near future. I really hope this isnâ€™t a one-time deal. Fat Mike and Sturgeon are on to something here. They have found something very special.

You can check this EP out here. Â  Â

Warn the Duke: Ghost Be Gone