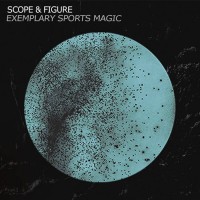 Rochester, New Yorkâ€™s Scope & Figure are both infectious and poppy. Their latest EP, Exemplary Sports Magic, has a dance-y indie pop sound accompanied by clever lyrics and great melodies. Not only does each song flow together, each one is different from the next while still maintaining the bandâ€™s key components. The EP was recorded in 2014, so the band has changed a bit since, which only makes it more exciting to hear what these guys will come out with next.

â€œStop Motion Peopleâ€ introduces us to the dance-y indie sound of Scope & Figure as a full rhythm section kicks in with a groovy bassline and a catchy guitar riff as vocalist Thomas Varner croons out his quick tongued vocals that match the energy of the song perfectly.

The rest of the EP follows suit, creating intricate riffs over clean drums. Each song shows Scope & Figureâ€™s creativity and ability to craft songs that are both gripping and powerful. â€œBreathing Apparatusâ€ is where the band gets a little psychedelic as if The Partridge Family was tripping and incorporated edgier themes. Not to compare Scope & Figure to a singing TV Family, but the band incorporates that happy sound reminiscent from that era on â€œBreathing Apparatus.â€ The band pulls it off perfectly, managing to maintain their sound while doing so.

â€œCalm Me Downâ€ is the final track and the most atmospheric and progressive of all the songs. The song ties in all the elements of the other songs while adding a little edge. The song is certainly a great closer.

Overall, Scope & Figure have created a wild sound thatâ€™s infectious and full of influences. Whether itâ€™s the band showing off their indie rock side or fusing that indie tone with psychedelic dance parts, each song on Exemplary Sports Magic has its own groove. While the band has most likely matured and morphed their sound since the recording of the EP, it only gains anticipation for whatâ€™s next for Scope & Figure.