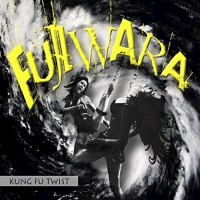 North Carolina three-piece Fujiwara have had a very busy 2015. They released Legacy during the summer, which was basically a collection of their best material to celebrate being a band for 20 years. Now they have released fourteen new songs on their latest album that they have titled Kung Fu Twist.

The bandâ€™s general sound is still a mixture of pop punk, surf punk, and skate punk and the singing is still that unique, high-pitched drone of a solid majority of this album. However this time they have up their instrumentation writing. Instead of just a few heavily distorted power chords per song, they pushed themselves a bit. And you can definitely hear that in the song â€œDeath Before Dishonor.â€ What makes this track stand out is the its great use of drum fills that sort of â€œanswerâ€ back to the stop-and-go guitar chord changes.

â€œMayhemâ€ is also a stand out track because itâ€™s a completely instrumental. This also where you can tell Fujiwara upped their song writing game because they seem to delve a little bit into some metal, while still maintaining their surf and skate punk vibe. Thereâ€™s even a small breakdown filled with slow-crawling octaves coming from the guitar for a bit until the drums kick back up into gear and speed up to a much faster pace.

Fujiwara have made some improvements with Kung Fu Twist, but not enough to where it could be considered an overall better record than Legacy. The issue still is that many of the songs are hard to tell apart from on another when you listen to all fourteen of them in a row. Perhaps the issue could possibly be that this album is too long for their style of playing. Sure, some of the songs on this are better written than some of the ones on Legacy, but the majority just seem like filler.

You can check this album out here.Â