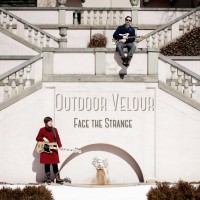 Iâ€™m by no means extremely familiar with the work of David Bowie, but I can catch an obvious reference to his work. â€œCh-ch-ch-ch-changesâ€, the opening track on Outdoor Velourâ€™s first LP, invokes a well-known David Bowie track, but itâ€™s a tribute in phrasing alone. Itâ€™s also something of a mislead and quite literally invokes the album title, preparing the listener for something entirely strange: itâ€™s over a minute of near cacophonous noise and feedback, though itâ€™s not the â€œstrangeâ€ that listener is facing the rest of the album. When the real music kicks in with track two, youâ€™ll find whatâ€™s truly strange (er, unique) about the record is the juxtaposition of a million different styles by the wife-husband duo of Outdoor Velour. For some, the genre jumping might be a bit overwhelming. But Iâ€™d reckon Face the Strange would be breath of fresh air to many listeners.

The first half batch of songs seems to lean more towards pop, new wave, and electronic genres, while still pulsing with a rock and roll heart. â€œEndless Circleâ€ brings me back to the big pop-chorus sing-alongs of Iâ€™m From Barcelona (remember those guys?), while â€œSugar Loveâ€ is a sickly sweet folk-infused love song as saccharine as its title. â€œDonâ€™t Knowâ€ is a full on electronic pop song, benefiting from a killer digital drumbeat. â€œGo Northâ€, a particularly strong track, displays whatâ€™s most likeable about the band: the vocal interplay between the two sole members, Cara and Greg. Both have voices just unique and not-perfect enough to be endearing, but when theyâ€™re harmonizing the same part (as they do on the chorus of â€œGo Northâ€), itâ€™s incredibly effective.

The band really opens up the second half of the album, inviting a grungy pop-rock sound for the likes of â€œGot the Hivesâ€ and â€œEchoesâ€. The goofy â€œCasper the Friendly Ghostâ€ is classic Weezer in every way, and is one of the albumâ€™s simplest and best songs. The final track, â€œZappâ€™s Songâ€, an ode to the family dog, is a mixed bag. Itâ€™s the albumâ€™s most poignant and has a huge orchestral build, complete with flutes and strings, but the lyrics would benefit from some subtlety. Itâ€™s from the point of view of the dog himself and can be a little cringe-worthy at times, though I think that was Cara and Greg were going for.

With an album like this, diversity can either be its biggest blessing or greatest curse. While it may be a refreshing take on disparate sounds Greg and Cara enjoy, each song risks alienating the listener because itâ€™s just SO different from the last. Judging from lead vocals alone, it seems the Greg-penned songs fall a little on the heavier pop-rock side, where Caraâ€™s tracks are radio-ready and poppy. With this divide, listeners might end up picking favorites and discarding the rest depending on where their tastes land. Either way, kudos to the band for fucking going for it. This ainâ€™t a four chord rock album. Thereâ€™s a lot to take in and itâ€™s worth the exploration.Â

Disclaimer: Outdoor Velour includes Punknews Podcast editor Greg Simpson. Reviewer Alex Meylink has no association with Greg aside from the fact that they both contribute to Punknews

EL VY: Return to the Moon