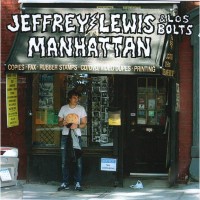 For me, Jeffrey Lewis has always been an artist on the cusp of something truly brilliant. He's managed to occupy the space between Ramshackle Glory's tales of personal desperation and the poetry found on a Mountain Goats album. While all of his material has had a few gems on it, the number of slower songs where the music and his vocals can't keep me engaged for the duration of his longer songs have always been the reason I find myself disengaging from his albums. The exception to this, was 12 Crass Songs but being an album of wildly reworked covers, it can't be compared to his other work with any amount of fairness. Enter his newest album, Manhattan, with his newly rechristened band, despite featuring several familiar names, Los Bolts. An album where many of the major issues I had with previous efforts have been largely corrected.

Opening with, â€œScowling Crackhead Ian,â€ we find Lewis reminiscing about someone who grew up in the same neighborhood as him over a catchy, though not overly busy, piece of music. Lewis's greatest successes as a lyricist are brought to the forefront in this song. That strength, is of course, his attention to detail as he recounts his encounters with this near anti-hero of the neighborhood. By the end of the song which touches on their youth together, landmarks that were present throughout their lives, and even their mothers we're left with a character sketch of someone we all know and can relate too. Which ultimately makes this song an outstanding success, while none of us no the proverbial Crackhead Ian, we all know a Crackhead Ian â€¦ someone who bounced in and out of our lives sometimes for better and sometimes for worse. But, someone we were never sad to see go and nor found ourselves proactively inviting back into our lives.

Two of the next three songs, â€œThunderstormâ€ and â€œBack To Manhattan,â€ fall into the previously mentioned trap Lewis had previously found himself in all to often in an album, overly long songs that are hard to get through. Not because they're lyrically boring. I would even rank â€œBack To Manhattanâ€ as one of the better lyrical performances on the album, but because the music and Lewis's vocal delivery lead to songs do little to pull the listener in and engage them for the five minute plus lengths of each song. Fortunately, the songs are separated by â€œSad Screaming Old Manâ€ wherein we find meditations on a crazy man living across the hall of Lewis's apartment complex and lyrics about whether or not he's staring down his own future even as he sings about how he finds the man to be a confusing and, at times, frightening part of the micro community his apartment building exists in.

The album finds Lewis touching on everything from falling into a funk when your significant other goes out of town, â€œOutta Town,â€ the pitfalls of the music, â€œSupport Tours,â€ and the lifestyle changes that can occur when one chooses to â€œHave A Baby.â€ While album closer, â€œThe Pigeon,â€ doesn't offer up much in the way of Lewis's typical song style it doesn't present a very New York retelling of the Edgar Allen Poe classic â€œThe Raven.â€

This album is where Lewis's songwriting abilities and instincts have nearly caught up with what have always been superior story telling skills. While he's yet find the perfect mix of the two, like John Darnielle, and he'll never attack the system or himself with the same ferocity as Pat the Bunny does. This is the album where Jeffrey Lewis has finally arrived as songwriter. Manhattan is the culmination of fourteen years and eight albums, and while there have been a few missteps along the way and a number of side projects and collaborations, Jeffrey Lewis has finally written an album that people will look back on in twenty years and say this was the first album in what will hopefully be seen as his classic period.

You Blew It!: Pioneer Of Nothing [EP]