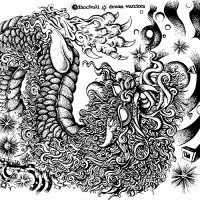 Edhochuli the band obviously gets its name from Ed Hochuli the man, an extremely muscular NFL referee. The real life Hochuli is in his 60s and looks like he could bench press a house, but I find no further reference to him here. Dream Warriors was a pretty cool Dokken song from 1987 and also the third movie in the Nightmare On Elm Street horror series. There doesnâ€™t seem to be any hair metal or slasher film references here either. (Thereâ€™s a dragon on the cover, I guess thatâ€™s a little Dokken-esqe.) Truth be told, even after multiple listens I still really donâ€™t know what the hell this record is all about. I really could have used the lyrics.

Hereâ€™s what I can tell you. Edhochuli is a four-piece band from Pittsburgh. Theyâ€™ve been around for eight years, and the members have played lots of shows in lots of local bands youâ€™ve probably never heard of. Dream Warriors is six songs spread out over 31 minutes (theyâ€™re calling it an LP). At least half the songs have titles that are dangerously close to puns. Itâ€™s produced by Chris #2 from Anti-Flag and released on their label. I applaud A-F Records for the wide variety of stuff they put out. This is adventurous if nothing else.

Musically, this reminds me of mid-period Neurosis with maybe a little Iron Maiden thrown in. Almost all the vocals are delivered in a yell. The songs are long and complex. Thereâ€™s lots going on, but very few hooks or melodies that really grab you. â€œFour Nice Haircuts, Then We End Itâ€ sets the stage for whatâ€™s to come. Itâ€™s very complicated and unfolds in two movements. â€œErase the Pastâ€ is probably the catchiest thing here and clocks in at a mere three minutes and 17 seconds. â€œHashishkabobâ€ wins the award for best/worst song title. â€œFilibusterâ€ lives up to its name and goes on and on. Itâ€™s nine plus minutes of artsy post-punk.

I generally pride myself on being able to understand what an albumâ€™s all about, but I never got there with Dream Warriors. I donâ€™t hate it, but I donâ€™t love it either. Edhochuli will likely only appeal to the narrow group of fans who enjoy both punk and prog-rock.