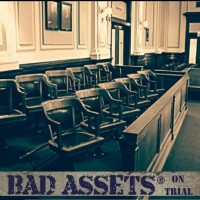 Bad Assets is a five piece street-punk/Oi band from Detroit. On Trial is their second full length and their first for East Grand. They play earnest, passionate, working class anthems with a Midwest sensibility. Musically, itâ€™s classic punk with shouted lead vocals and gang vocals on the choruses. Bad Assetsâ€™ tracks range from high-minded political punk to low-brow drinking songs, and everything in between. Their sound will appeal to fans of bands like Cockney Rejects, The Business and Anti-Heros.

Bad Assetsâ€™ blue collar roots come through loud and clear on album opener â€œWeekend Offenderâ€. Itâ€™s a song about getting drunk with your friends on Friday night after a hard week of work. â€œBrokenâ€ displays the bandâ€™s devotion to Detroit, even as it acknowledges its many problems. â€œFuck You, I Quitâ€ is â€œTake This Job and Shove Itâ€ for the 21st century. Lars Frederiksen gets co-writing credit and sings on the title track, one of the albumâ€™s highlights. It's about being constantly judged by society. â€œYesterdayâ€™s Heroâ€ deals with the struggles of ex-soldiers, but runs a bit long. â€œPC Policeâ€ is another highlight and contains a line that really sums up Bad Assets. â€œWeâ€™re not racist or sexist or anti-gay/We just want a beer, so go the fuck awayâ€.

â€œReturn to Senderâ€ laments how cheap, imported products have cost hard working Americans their jobs. â€œWish You Were Hereâ€ is one of the best songs in recent memory about a fallen friend. Itâ€™s sentimental without being sappy, and has a great Mike Ness style guitar solo. â€œPrick, Not a Mickâ€ is the albumâ€™s most confounding song. It seems to be railing against people pretending to be Irish on St. Patrickâ€™s Day or as an excuse for getting drunk. (It hardly seems like one of the great issues facing modern society.) â€œMotor City Violenceâ€ closes the record on another high note. It features the familiar raspy growl of Jay Navarro on vocals. (Navarro has been a busy boy this year. Heâ€™s put out the excellent new Break Anchor LP. Heâ€™s toured with Suicide Machines. Heâ€™s played shows and is working on a new album with Hellmouth. Heâ€™s even managed to be a guest on a couple fellow Detroit bandsâ€™ records.) The message of the last song is a potent one. It accuses the powers that be of ignoring crime in the city as long as it doesnâ€™t spread to the wealthy suburbs.

On Trial doesnâ€™t have quite the sonic punch of the bandâ€™s 2012 LP The Spirit of Detroit. The mix isnâ€™t as in your face, but itâ€™s still a very good album. Bad Assets really captures the essence of the working class experience. Their songs express facing big battles and celebrating small victories. Street-punk and Oi are not all that fashionable in current punk circles, but this is honest music whose roots go back to punkâ€™s earliest origins. This is blue collar music made by blue collar guys from a blue collar city. Highly recommended.Â

California X: Nights In The Dark