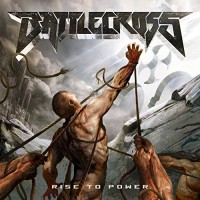 If you like thrash, you will love the music of Battlecross. Whether or not you enjoy the band as a whole will largely depend on what you think of singer Kyle Gunther. Heâ€™s a man of two distinct voices, both of them extreme. The majority of his singing is done in the screechy, high-pitched style of Overkillâ€™s Bobby Blitz or Exodusâ€™ Steve Zetro. Itâ€™s actually even more intense than that. You may be tempted to call it shrieking. The other style would be best described as a demonic howl. It literally sounds like itâ€™s coming from the pits of Hell. (Some people want to label Battlecross as death metal because of the lower register roar, but musically this is much closer to retro thrash.) Sometimes the two voices are stacked on top of one another for even greater impact.

Rise to Power is the third full length from the Detroit five piece. Lyrically it tends to deal with real life challenges rather than the dungeons and dragons themes of many other heavy metal bands. The struggle for daily survival is a common subject among Detroit acts, even if here itâ€™s in a more epic metal context. The lyrics (included with physical) are not offensive. Thereâ€™s no virgin killing or goat defiling. Thereâ€™s not even any cursing. The vast majority of the words are positive and self-empowering. Itâ€™s actually a nice change of pace for a heavy band.

â€œScarsâ€ sets the stage for this ten song collection of 3-4 minute thrashers. â€œNot Your Slaveâ€ is probably the albumâ€™s catchiest and strongest song overall. Battlecross also incorporates plenty of elements of classic metal (think Iron Maiden) into their sound. Many of the songs feature big, sweeping guitar leads and solos. â€œBlood & Liesâ€ wraps its propulsive thrash with a pretty, picked acoustic intro and middle section. Even the mellowest interludes never get too mellow due to the harsh vocals. There are no ballads, thatâ€™s for certain. Closer, â€œThe Pathâ€, is the recordâ€™s most adventurous track. It starts with a pleasant acoustic intro, then transitions from classic metal to violent thrash to something resembling a bluesy shuffle.

Battlecross is not Iron Reagan. There is no crossover punk appeal. Rise to Power is for headbangers only. Guntherâ€™s voice(s) pushes this close to being extreme metal, but it works. Itâ€™s pretty damn heavy, and itâ€™s pretty damn good. Those who thought the new Slayer album was too soft should definitely check this out.Â

Beach Slang: The Things We Do To Find People Who Feel Like Us