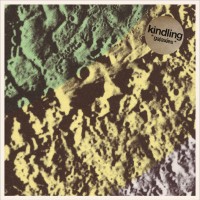 One of the many reasons indie rock fans like shoegaze is that it tends to balance a woozy romanticism with an energetic, pummeling hard rock edge, like Wendy & Bonnie fucked Black Sabbath and then formed a supergroup. The same is evident with Kindling, whose driving, pummeling fuzz is matched with the sweet, lightly passionate vocals of Gretchen Williams. Kindling are from Easthampton Mass and like a lot of bands around there, they have a noisy powering style a la Dinosaur Jr., but they have the songwriting and talent to actually match that sort of zombied, crashing lurch.


These four tracks buzz and stumble into their own rough beauty, like the duet "Painkiller", a stomping slow burner reminiscent of m b v's "Who Sees You" in its pounding drum beats and enraptured male-female vocals. "Blinding Wave" and closer "Coastal" hit a certain pop punk sound in their 4/4 rhythm and structure as well, and really that's the strong downside of the EP: it is a bit derivative, not quite enough to make you want to just listen to the bands they're copping a bit of but close (I'd also say I wish this was engineered to be a bit louder). But the surf rock, hooked guitar throughout and well-written songs are still definitely worth taking notice of, and I expect Kindling to make a big splash in the future.


With Galaxies, Kindling stake their claim in the Massachusetts music scene, especially with better songs than many bands receiving hype (cough, whirr, cough). I'm looking forward to their first full album and where they'll take the bash and sway they show here.