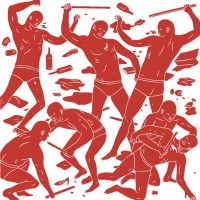 From the moment it was hinted that Single Mothers were beginning to record their debut LP, anticipation intensified. Their self-titled EP released in 2011 hit like a punch in the face. The buzz surrounding the band notably grew with their witty presence on social media and involvement with Jeremy Bolmâ€™s (Touche Amore) Secret Voice Records However, given all this attention, one wondered how front-man Drew Thomson would react given his self destructive nature evident in their early work, on stage, and in interviews. Those worries are quashed the second Negative Qualities begins.

As the record opens with â€œOverdose,â€ a sonic shift from their earlier work is immediately noticeable. The mix allows for a more balanced attack, the vocals have more clarity, the drums are sharper, and the guitars have more punch. While Negative Qualities is not as lo-fi as their back catalogue, no aggression or raw energy is lost. Instead, the tightness of the band is enhanced. The record plays like a night fueled by liquor and angst not unlike those Thomson experienced while writing it. After opening with the driving â€œOverdoseâ€, Thomson turns his attention to his distaste for the attitudes of his â€˜educatedâ€™ contemporaries. He does so with an astuteness and a vernacular that adds credibility to his critique. This sharpness is on full display with lines like: â€œHeâ€™s got passion and penmanship, a BA in the soft sciences. Iâ€™m just a dropout without a clue- At least Iâ€™m not incubated.â€ The assault that is Negative Qualities continues with â€œHalf-Litâ€. Guitarist Mike Peterson adds a dynamic range not often heard in SM songs and bass player Even Redsky remains locked in with drummer Brandon Jagersky. â€œHalf-Litâ€ is the first climax of substance-fuelled depravity and the record shifts in mood on â€œFeel Shame.â€

In â€œFeel Shameâ€, the instruments are more subdued and Thomson shifts from a furious accusation of his surroundings to more reflective distain. Energy is re-upped on â€œCrooksâ€ and the exasperated screams of Thomson and Redsky allows the listener to truly empathize with their despair. On standout track â€œPatricideâ€, Thompson introduces some of the other anguished souls he surrounds himself with. The poignant lyrics sit chillingly atop Petersonâ€™s melodic playing, which appears more often in this record than on their previous work. In "Ketamine," Thomson delves deeper into the complex interactions between the unsavory characters in his life and his addictions: â€œAnd all those AA rhyme schemes, I know they're all about me, and to be honest, Drew, they're getting pretty mean.â€

A second and final climax is hit on â€œBlood Pressureâ€. Every instrument is brutally pounded as Thomson wails about being overwhelmed by the demons he discussed in songs previous. Album closer, â€œMoneyâ€ is perfectly placed at the end of the record. The song is slow, somber and plays as if the band is fighting through exhaustion to deliver their final defeated sorrows. Like a battered drunk at the end of a shameful bender, Negative Qualities closes with fitting words: â€œYou help me out when you know Iâ€™ve been waiting, on answers that I wonâ€™t be receiving. All I want to do is sit here complaining.â€

It would be an injustice if this record were not appreciated as one of the most significant punk records of the last ten years. Itâ€™s completely refreshing and difficult to compare to anything else in the genre. Negative Qualities is delivered with unbridled ferocity and Thomson is such a captivating antihero. He perfectly captures what itâ€™s like to be young, disgruntled, and drunk in urban Canada. He understands the scenes, the relationships, the escapes and their consequences. This debut is a must-listen for anyone with any affinity for punk/hardcore music.