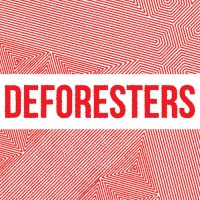 The Deforesters are back, well at least for now they are.

Coming in with a 4-track self-titled surprise release they definitely show that while other projects have occupied them for the time being , they still have managed to squeeze in another release along with a couple of practices and upcoming shows.

Starting off the E.P with the track "A Song for the Reptoids of Denver to Sing" it serves as the perfect start to what I felt was going to be an exciting, fun yet ultimately too short release. Â I guess I can't complain considering it was a surprise but this song really does have a catchy chorus with "You're not sleepin' and I'm not sleepin' at all" part, one of the somewhat classic traits about this band.

"Aether Theories" and "Air Out Your Stinkables" both seem to give me a vibe similar to another of their label mates, Banquets in a little less serious tone however. The accompanying background singers to Aether Theories really bring out the song and make it a like-able (and dance-able) tune.Â

Topping it all off is "Baroque Obama," staying true to form the band delivers a tight recording with a perfect emphasis again on the chorus itself. You can't go wrong when the lyrics 'It's a shitty world and you wear it in your eyes' are blasted through your speakers. The guitar solo stands out as the climax of the whole release actually and is a solid performance from an already solid release.

I'm not really picking up on their track titles however, they usually are some sort of tribute to a popular T.V series but in this case it seems more of some sort of inside joke within the band. Whatever it is, it's still something you'd expect from these guys.

Are things picking up for Deforesters or is this release just a one-off?Â

We'll see, but in the meantime this is an E.P you should check out.

Youth Decay: The Party's Over