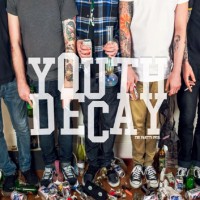 Although it might be simply because their time in the spotlight coincided with my most formative years, Living With Lions has been and always will be my gritty pop-punk touchstone. The big hooks, speed and gnarly melodic voice of the bandâ€™s two big releases, Make Your Mark and Holy Shit, took on the sound of a ten-years-younger Lifetime raised on a diet of Descendants and modern hardcore. Though Living With Lions is still active, without the big lead vocals of Matt Postal or Stu Ross, they arenâ€™t the band I fell for at 19. Iâ€™ve been dying for a follow-up to Holy Shit in spirit for the last few years. Enter Youth Decay, featuring Ross on guitar and vocals, Living With Lions' drummer Loren Legare, and members of Vancouver favorites Carpenter, Daggermouth, and The Grave Life. After a solid EP, The Partyâ€™s Over is the bandâ€™s first full length, promising a hardcore-punk conglomerate worthy of the â€œsuper-groupâ€ distinction. Is this what Iâ€™d been hoping for?

Sort of. It is the first Youth Decay full length, so itâ€™s expected for the band to try and find their footing, but this often feels like its trying to be three entirely different records in one (albeit, three well-done records). About a third of The Partyâ€™s OverÂ hits the benchmark imposed by the impressive lineup, bringing a gritty pop-punk heaviness that is as equal in thunderous melodic guitar lines and booming, fast drums as it is in appealing sing-along choruses. The albumâ€™s opener, â€œBalanceâ€, is a pristine example: forever stuck in your head, heavy, but clipping along at exciting speeds. â€œLittle Winnipegâ€ and â€œAsh Blondeâ€ follow form, utilizing Legareâ€™s robotic tightness and drum work ability to build fast, memorable punk anthems.

Another third of the record falls into some of pitfalls of modern punk music: the dreaded â€œhappy hardcoreâ€ tendencies. Itâ€™s such a blurry line between catchy, gritty pop-punk and the likes of Four Year Strong or A Day to Remember that Iâ€™m surprised bands like Youth Decay donâ€™t step over it more often. Tracks like â€œLiving in My Headâ€ and â€œWaiting for Nothingâ€ fall a little too much in that camp, and while thatâ€™s not such a bad thing, it can be a dealbreaker for some. These songs just feel like theyâ€™re trying a little too hard to appeal to the modern Warped Tour generation.

As if recognizing and defying these â€œhappy hardcoreâ€ vibes, the remaining odd tracks on The Partyâ€™s Over remove all vocal melody for a more straightforward hardcore. Though seemingly most out of place, they might be the recordâ€™s ace up the sleeve. They hit the nail on the head with these, and the bangers provide an alternative to some of the more generic fast pop punk that clogs up the middle of the album. This hardcore component shouldnâ€™t be too surprising with Stu Rossâ€™s recent turn as Comeback Kidâ€™s guitarist, but it is glaringly different in light of the rest of the recordâ€™s obvious melody and hookage. In fact, Comeback Kid might be the closest comparison, and the style really allows vocalist Stu McKillop to open up on tracks like â€œSlow Clapâ€, â€œPut if Offâ€, and â€œPot vs. Kettleâ€.

This is not the sort of record youâ€™d think a Sleater-Kinney reference would garner, but exactly an amalgamation of everything these guys have done before. With big hooks, explosively loud recording quality, and a meandering through different variations on hardcore to pop-punk, it can be an often mixed bag, but mostly provides positive results. My fingers are still crossed for a Living With Lions/ Stu Ross reunion, but this will tide me over for a while.Â