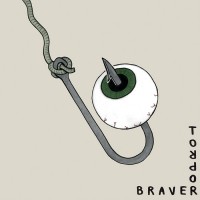 Minneapolis trio Braver have released their next full length, which they have called Torpor. This album has nine high-energy and melodic tracks that pop-punk fans will enjoy.

A solid majority of the songs are pretty straightforward pop-punk tunes. The title track for example made up mostly of highly distorted guitar chord progressions that at times are palm muted, while the lead vocalist sings very melodic and even somewhat reserved vocals. And at the same the drums seem like they are just being smashed from being played so hard.

But Topor isnâ€™t only made up of those kinds of songs. Braver changes it up a bit with couple of other tracks. â€œLes Enfant Terriblesâ€ is a considerably slower song compared to the rest and it only consists of the bandâ€™s lead vocalist a clean electric guitar.

Where Braver really shines on this record though is on the last song called â€œObject Permanence.â€ I really wish they had done more of these kinds of songs on this record. And what I mean by that is that the instrumentation is so much more unique and interesting on this track than the rest. Instead of just power chords being played over vocals, thereâ€™s great use of an octaves for the main hook. The rhythm too, is much more interesting because they incorporate some â€œstart-and-stopâ€ techniques and when you first listen to it you canâ€™t really tell what directions the vocals (or the rest of the band for that matter) are going in, which in turn makes this song all that more interesting.

Ultimately, Braver have put forth a solid effort with Topor. There are definitely some pop-punk gems on this record, as well as a few you can leave. Thereâ€™s clearly something hear with this band. Donâ€™t make the mistake of overlooking them.

You can check this album out here. Â  Â