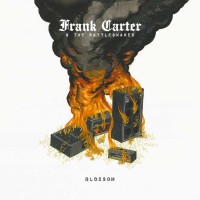 Frank Carter and The Rattlesnakes

For the last few years, things have been up and down for Frank Carter.Â There was the fallout from the release of the truly-underrated Gallows record Grey Britain â€“ a dark, ambitious and vitriolic punk album, which cast a somber light over the troubles of Queen & Country, from politics and religion, to growing gang violence and the disassociation of British youth. It was a record that didnâ€™t land very well with the suits at Warner Music, and it saw them swiftly and unceremoniously dropped from the label in 2010. Not long after, simmering tensions between members over musical direction, saw Frank make an exit from the band via email; a move uncharacteristic of his frenzied stage persona.

Wishing his former band-mates well in their future endeavours, FrankÂ appeared to waste no time in launching into his next musical project, the rock/folk inspired group, Pure Love, collaborating with Jim Carroll of Suicide File/The Hope Conspiracy fame. As hardcore punks come wandering troubadours, the group released a self-titled full-length record and EP, and spent the next few years touring across Europe before the band seemed to dissolve and go on "indefinite hiatus" in 2014. And throughout all of these events, Frank was also focusing on his day job as a successful tattoo artist, getting married and recently, becoming a father. A tumultuous few years to say the least.

Blossom, is the dÃ©but full-length record from the latest entry in Frankâ€™s sonic assembly line, with his assembled partners in crime/music being known collectively as "The Rattlesnakes." And let me tell you something straight up â€“ itâ€™s one hell of a racket

Considering the band's genesis, rehearsals, first show and first release all came to be within the space of eight months, you just know that Frank had something simmering deep down inside of him â€“ a melting pot of lyrical attacks and incendiary phrases just waiting to boil over â€“ and Blossom is the direct result of all of it. Musically, the 10 tracks on offer here explore territory that will come as familiar to those who have followed Frank since his early days in Gallows and releases like Orchestra of Wolves. We get sharp bursts of angular, punk fury ("Trouble," "Devil Inside" and "Rotten Blossom"), slow-burn dirges ("Paradise" and "Loss") and even some straight up, balls out rockers ("Juggernaut" and "Fangs").

But this record isnâ€™t just a selection of hardcore-by-the-numbers tracks. Frank and The Rattlesnakes flex their musical muscles into new and exciting territories. Whether itâ€™s the drawn out, dishevelled and messy outro on "Paradise," after Frank literally curses and spits on the ideals of suicide bombers, or the pained, haunting croon vs. scream combination featured on "Beautiful Death," probably the closest thing to a ballad on the entire record. And in the most fitting way possible, somewhat echoing Frankâ€™s discussed trials and tribulations, the best is saved for last, in the form of the bitter, bile-fuelled anthem "I Hate You," where heÂ brings it all home and delivers his most scathing, aggressive and thoroughly enjoyable lyrical tirade to date, over the top of a brilliant bluesy riff for the closing track.

If youâ€™ve enjoyed anything in Frankâ€™s musical catalogue in the past, then you would be doing yourself (and The Rattlesnakes) a massive disservice in not checking this record out. As Frank himself added in a YouTube comment, â€œWeâ€™ve all got that person, so listen to this song and take a minute to enjoy how much you hate them. Youâ€™ll feel better for it.â€

Welcome back mate, weâ€™ve missed you.