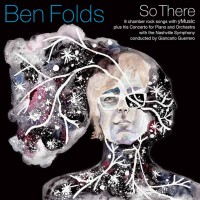 One of the things that is most interesting about Ben Folds is the experimentalism undertone that connects all of his works. Even though most of his material is rooted in singer-songwriter pop, he finds way to use that as a coating for a more daring chassis. On Lonely Avenue he allowed himself to be a conduit for Nick Hornbyâ€™s brain. Nighty Night was a collaborative EP written and recorded in eight hours. Even the last Ben Folds five album The sound of the life of the mind seemed to be a more â€œWhat if Ben Folds Five tried to record in a modern context?â€ rather than a sequel to Reinhold Messner. His daring works usually work because they are both boldly daring and boldly executed. Unfortunately, So There is awkward in execution and for the first half, very, very, very safe.

Really two EPâ€™s crudely stapled together, So There joins eight tracks of â€œchamber popâ€ music, which Folds recorded with the yMusic ensemble, and a three part concerto recorded with the Nashville Symphony. Although the first half is billed as a collaboration, a cursory reading of the credits show that itâ€™s not really the case. Folds wrote nearly all of the music and lyrics, leaving yMusic as his backing band. Thatâ€™s not necessarily a bad thing, mind you, but here yMusic does little than fill in around Folds and when they do fill in, it sounds in the exact same style as Folds when heâ€™s solo- though maybe with a little bit less of Foldsâ€™ trademark snarkiness/snottiness/thinly veiled self-hatred.

That is to say, the yMusic songs certainly sound like Ben Folds music, except that they are frustratingly safe. â€œCapable of Anythingâ€ is all of Ben Foldsâ€™ soft, cooing with none of the teeth that he flashes once in a while. Title track, â€œSo There,â€ relishes in the subtle, mid-range tone of Foldsâ€™ chords, but it flutters there for so long it goes from an exercise is musicianship to what seems like someone hanging too long on the edge. Every time the band has an opportunity to break out of the gentle and go somewhere scary or interesting or weird, they back off, or worse, linger in the safety zone.

Except when they donâ€™t, like on â€œf10-D-A.â€ Itâ€™s a funny 10 second dick joke, except that it lingers on for two whole minutes. At 30 seconds, youâ€™re going, â€œwe get it!â€ at a minute, your clenching your teeth. By the time the clock makes its second rotation, you are wondering if Folds just wanted any kind of filler he could find. This track alone makes one wonder- did Folds really want to do eight standard Ben Foldsian tunes, or did he really just want to a concerto and the label demanded something more marketable on the first half?

Yet, the exception is â€œPhone in a pool.â€ A driving ballad that could match any of Foldsâ€™ other classics, it finds him pointing the finger at himself (and so many of his previous â€œyou wronged me!â€ tunes). The refrain, â€œSeems whatâ€™s been good for the music hasnâ€™t always been good for the life.â€ The whole song is genuine, revealing, and moving. Who knows if we sympathize with Folds and his plight, but heâ€™s painting an interesting, multifaceted picture (set to a pretty good rhythm.) That doesnâ€™t hold for the other tracks with yMusic.

While itâ€™s sort of a slog to make it through the yMusic half, the second half of So There redeems the album. Folds, much in the vein of Billy Joel, Elton John, and the other piano-rock heroes (and Zappa too) put his skills to the test and composed an entire concerto and then executed the work through a full orchestra.

Itâ€™s a bold move, in both that itâ€™s a test if the â€œpopâ€ guy can hang with the classical crew, and that, well, itâ€™s been done before. Well, thankfully Folds did go for the bold move. His concerto is riveting, whimsical, and powerful. To me, it seems as though this orchestral piece was written for pop fans as way for those less informed in the centuries old art to appreciate the work of the great masters. And it succeeds at that.

Folds starts the concerto with large, flowing, loud waves that sound like the backing to the golden age of Hollywood cinema. He flexes his muscles in that arena just before darting off to other areas that contrast loud power with miniscule tinkling. Folds is having as much fun composing as he is acting out how the instruments act against each other. Itâ€™s an exercise in how the moving parts of an orchestra work, while keeping in mind how to keep the listener fixated. As Folds pink and plinks from one instrument to the next, he creates a game in the listenerâ€™s head- a type of hide and seek where the orchestra will suddenly dart out with a whimsical section before melting into a more grandiose texture. Itâ€™s exciting and shows just how fun an orchestra can really be.

The main question presented by So There is why? Why stitch these two disparate works together? Why advertise yMusic so much when their contributions are unremarkable? Why not just record two more tracks with yMusic and make that a stand alone album (albeit a bit tedious one at that?) Why not make the concerto the main act, instead of reducing them to what are essentially bonus tracks? The only reason one can find is rooted in marketing. But, is this conjoined twin really what people want from Folds? Each side slows the other down. I say cut it in half and see if each side can make it under its own power. At least one of them can.

Minus the Bear / Murder by Death: live in Boston