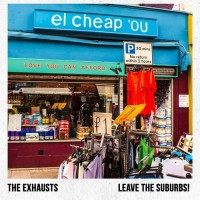 Many would agree that we are in the midst of a punk rock renaissance, and damn it is a great time to be alive. Weâ€™ve witnessed a resurgence of interest and influence so prodigious that punk has expanded far past the parameters set by the â€˜greatsâ€™ in the early daysâ€”in spite of the extensive taxonomic ranking of sub-sub-genres that were born out of necessity in an attempt to categorize it all (while arguing fruitlessly over each nuance like a couple in Home Depot trying debating if a paint color is more â€˜salmonâ€™ or â€˜coralâ€™ while narrowly avoiding divorce in the aislesâ€¦), the last few years have given fans a wealth of innovative and previously unimagined music.

At a time when invention and creativity are key driving forces behind punkâ€™s renewal, it takes a different kind of ballsy self-assurance to tackle a particular â€˜classicallyâ€™ punk sound that has been a staple for years, clearly defined in the eyes of fans who are not actively seeking additions to the classic repertoireâ€”like a well-worn pair of favorite jeans, there is no reason to actively seek out a new pair of the same denim until the previous pair is defunct. The Exhausts do not reinvent the classic garage/pop punk wheel with their debut full-length release Leave the Suburbs!, but that is in no way a complaint; instead, the albumâ€™s ability to inject new life into something so familiar is no small feat.

Clocking in at a quick 22 minutes over ten tracks, The Exhausts clearly subscribe to the â€˜play fast, end quicklyâ€™ playbook of punk, because they have a mission to accomplish and do so with efficiency and precision. Each track is quick, to the point, and with little â€˜fat to trimâ€™â€”making the â€˜meatâ€™ of the songs both heavily relied upon and the reason Leave the Suburbs! stands out as such testaments to The Exhaustâ€™s songwriting abilities.

Thematically, Leave the Suburbs! is about the grind, the day to day struggle of making it as far as you can to get what you wantâ€”even if itâ€™s not the finish line, itâ€™s the next step. The honesty is less brutal than relatable, but the thinly-veiled tongue-in-cheek smartass-ness of the album is everything youâ€™ve wanted to say but didnâ€™t have the balls to in any number of situationsâ€”whether that translates as vulnerable, naively hopeful, not having a fuck left to give, or just good old fashioned honesty varies from song to song, but the message is clear: weâ€™re here to do what we want, because at the end of the day itâ€™s the only thing that matters.

â€œJourney to the Call Centre of the Earthâ€ is the working manâ€™s anthem that anyone punching a clock (with a time card and not a fistâ€¦) can relate to. Between the cleverly crafted title pun coming to fruition in the opening â€œMay I help you?!â€ to the Poe-esque spiraling madness of the bridge repeating â€œweâ€™re sorry about the wait on the line / weâ€™re experiencing a very high volume of calls / weâ€™re experiencing a very high volume of callsâ€ you can hear the â€˜fuck youâ€™ in the vocals without The Exhaustsâ€™ ever having to say the words. But itâ€™s not all doom and despairâ€”the chorus sums up The Exhaustsâ€™, and Leave the Suburbs! mission succinctly: the walls are so grey / and I gotta get away / â€˜cause I donâ€™t wanna waste another day / the skyâ€™s so blue / and itâ€™s time for me to choose / exactly what I wanna doâ€.

You can pick up a digital download of Leave the Suburbs for a â€˜name your priceâ€™ rate here.

Smokey Bastard: Back To The Drawing Room