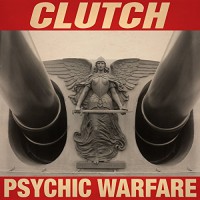 I recently saw Clutch live, and was fairly unimpressed by the fact that they played nearly every song from their new album Psychic Warfare. It had only been out for a couple of weeks, and even most of the hardcore fans were not familiar with the material. After giving the record a few spins at home, it has grown on me considerably. I was pleasantly surprised by how favorably it compares to the Clutch albums I loved from two decades ago. Their sound is still built around bass lines that would make Geezer Butler proud. The guitar still alternates between psychedelic metal riffs and slinky and soulful leads. The drums can still be driving and aggressive or funky, sometimes in the same song. The weird lyrics are still delivered by both spoken word and tuneful howl.

After the brief intro â€œThe Affidavitâ€, â€œX-Ray Visionsâ€ kicks things into high gear and gives us the line that is the albumâ€™s title. â€œFirebirds!â€ is another fast song, and the two combine to conjure up images of staying up all night listening to Coast to Coast. (Itâ€™s an overnight radio show about alien abductions and other strange, otherworldly phenomena.) Things get bluesy for the desperate character in â€œA Quick Death in Texasâ€. â€œSucker for the Witchâ€ will almost certainly go down as a Clutch classic. â€œYour Love is Incarcerationâ€ continues the theme of falling for the wrong girl.

The short, western flavored instrumental â€œDoom Saloonâ€ leads to the slower â€œOur Lady of Electric Lightâ€. Itâ€™s a love song to a jukebox, and another likely classic. The songs often reference one another and flow seamlessly from one to the next. â€œNoble Savageâ€ and â€œBehold the Colossusâ€ are the type of cerebral, left of center songs that devoted Clutch fans will love. â€œDecapitation Bluesâ€ is another catchy highlight. Psychic Warfare ends with the country flavored â€œSon of Virginiaâ€. Itâ€™s a refreshingly earnest song for a band that specializes in the absurd.

Psychic Warfare is Clutchâ€™s 11th record, and itâ€™s a solid listen from beginning to end. It will surely please the wide variety of headbangers, stoners and hipsters that are drawn to the band. I canâ€™t help but wonder if the bandâ€™s consistently good output is due to the stability of its line-up. Itâ€™s rare in this day and age for the same four guys to stick together for more than 20 years. Most bands from the same era are nostalgia acts at best. Fortunately, Neil Fallon (vocals), Tim Sult (guitar), Dan Maines (bass) and Jean-Paul Gaster (drums) continue to crank out the good stuff.Â

The Exhausts: Leave the Suburbs!