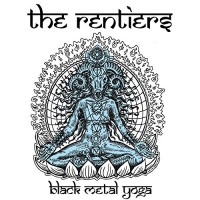 Just a few months after their debut, This is a List of Things That Exist, the Rentiers return with a new 7-inch, Black Metal Yoga. While plenty of what made Things work shows up here (Joel Tannenbaum and Anika Pyleâ€™s harmonies, for one), thereâ€™s more genre exploration here. Given the membersâ€™ punk rock day jobs, Black Metal Yoga seems to set up Rentiers as an outlet for other musical styles.

â€œBlack Metal Yogaâ€ is a sci-fi epic about black metal and aliens and meditating and also itâ€™s kind of kitschy. But like they sing in the song, â€œIt doesnâ€™t have to be real / It doesnâ€™t have to be right / If black metal yoga helps you sleep through the night.â€ Musically it takes the Rentiers further down pop territory, ending up somewhere around the Rentals/that dogâ€™s neighborhood. Mostly though it just reminds me that Iâ€™ve been a lot happier since I started listening to Tombs.

â€œDrunks and Stonersâ€ is a reggae song about chemically altered people not getting along. It is perfectly calculated to appeal to drunks and/or stoners. Like â€œBlack Metal Yogaâ€ itâ€™s a little tongue-in-cheek, but itâ€™s also produced like a Jimmy Cliff record so itâ€™s still a very well informed joke.

Also like the Rentals, the Rentiers all have other projects, so while the lineup is slightly different from earlier this year (ladies and gentleman, please welcome Floating Actionâ€™s Seth Kauffman), I can totally see this band as a bohemian roundabout of artists getting together to jam out songs about whatever tickles their fancy. Thatâ€™s how Black Metal Yoga feels. Those feeling particularly demonic should search for the cassette edition, which boasts a bonus track and some satanic chanting.