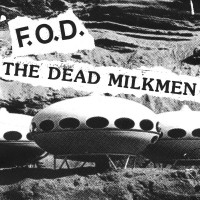 Split 7-inchers aren't more apropos than this. Both staples of the early Philly punk scene, FOD (aka Flag of Democracy) and the Dead Milkmen were forever intertwined when the Milkmenâ€™s Rodney anonymous name checked FOD on 1985â€™s â€œNutrition.â€ While the shout-out was likely an off-hand reference, that one line would serve as a sort of platform to compare how a punk band could grow and develop.

While the Milkmen would grow towards more reflective and college rock music, FOD stayed on the path of righteous hardcore. The Milkmen, for a brief time, were found in all the popular music mags (and even MTV) while FOD remained a cult act for those in the know. Thereâ€™s no one way to play it and if anything, this new contrast shows just how wide open punk can be.

It also shows that at their heart, both of these crews are pranksters. Originally, this release was stealthily advertised as a long lost 80â€™s release, supported by a wacky story involving some kids mom destroying the original press due to unauthorized credit use. Of course that was a tall tale. Instead, what this really is, is the two groups of Pucks playing newly recorded songs in a throwback style.

FODâ€™s side finds the band just tearing through three punk thrashers in about four minutes. Vocalist Jim McMonagle tries out his earliest style, and sounds like a cross between Jello Biafra and Ian Mackye. The band blasts by at warp speed in low-fi punk cadence. There are grunts and squeals and lots of feedback. But, despite the distorted, warped sound, the band sneaks in some pretty thoughtful lyrics. Take â€œQuit your cultureâ€ which opines on the idea of what actually makes people who they are. The band has always favored raw power and speed over precise execution, and here thatâ€™s a boon, with the band tearing themselves apart at the seams. This is fast and furious and it has a point to it if you can pull the brakes for a few minutes.

Meanwhile, the Dead Milkmen, who were generally more pop-orientated than the hardcore acts of the day, turn in a song built on classic structure with their classically skewed lyrics on the top. Riffing on a famous Sham 69 song, the Milkmenâ€™s â€œIf the Kids Could Git Together,â€ finds front man Rodney Anonymous dismembering early punk culture like a swashbuckler. Without ever directly skewering early (and contemporary) punk culture, Anonymous picks apart the trappings of the genre by reveling in an all of it, and demonstrating the inherent ridiculous and phoniness of it by example. In the theatre of life, surely Anonymous is off the stage, in the back row, laughing his ass off, tears in his eyes, pointing with glee.

FOD and the Milkmen have taken dramatically different routes throughout their careers, but underneath all of that, there seems to be a common thread that binds them. Iâ€™d try to make some sort of grandiose statement on the condition of life as exemplified by this, but both of the bands here would probably find that kind of thing really, really, really stupid and mock it viciously.

Toy Maker: There's A Ghost In These Walls [Cassingle]