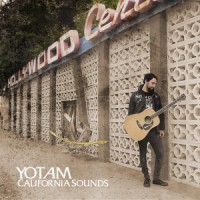 Yotam Ben Horin, lead singer and bassist for the Israeli punk band Useless ID is no stranger to setting aside his more aggressive music and focusing on acoustic material. His first solo album was Distant Lover, which came out in 2012 and now he is back at it with his new album California Sounds.

Though California Sounds by definition is an acoustic album it is a bit more than just a guy singing his heart out while strumming a few chords. On the instrumentation side, Yotam took this album a step further. In the title track Yotam added a clean, but reverbed electric guitar to play a main riff, a soft solo, and to play some of higher notes to accent the choruses. The song â€œHeaven Sentâ€ has a much more folk vibe. His vocals and the backing vocals are much gentler and one acoustic guitar is plucking the lead part while another is just strumming the main chords. Itâ€™s nothing revolutionary or outstanding, but still Yotam makes it work in his favor.

Most acoustic albums are obviously not written to show off how well the musicians can â€œshred.â€ Itâ€™s typically much more about the message or the artistâ€™s feelings in the lyrics and this one of the aspects this album really has going for it. The latter part of California Sounds does get pretty dark lyrically. The song â€œTony Sly,â€ which Iâ€™m sure you can guess is about the late No Use For A Name front man, has heart-felt lyrics like â€œWish I could have one second in July/ So I could goodbye/ To my friend Tony Sly.â€ And the song â€œGrandfatherâ€ has lines like â€œI know that you think of me/ A shitty grandson Iâ€™ve been to you/ Youâ€™re my grandfather and itâ€™s probably trueâ€ and â€œAs you get ready for chemo therapy/ Theyâ€™ll do their best/ To you keep away from me.â€

Yotam has clearly put a lot of heart and soul into California Sounds. Some of the songs, like the ones Iâ€™ve mentioned, are pretty good, but there are others on here that just seem like filler, which in turn make this album drag a bit at certain points. Yes, he â€œspilled his gutsâ€ into writing these lyrics, but how does that make this solo acoustic album stand out from others? This album just doesnâ€™t grab your full attention for its entire duration. Overall though, itâ€™s a solid release with some stand out songs and some that are not.

DFL: Proud to Be [Reissue]