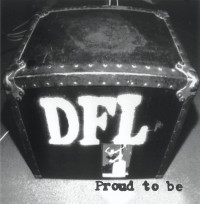 The most striking thing about DFLâ€™s second album, Proud to Be is just how genuine it sounds. Originally released in 1995, following in the wake of the surprise(?) commercial success of Green Day, the album swims against pretty much all the other punk trends of the time. Green Day established that a punk band could make money and that to do so, all you really had to do was adhere to the core tenants of radio airplay and voila!

So, what did DFL do with Proud to Be? They continued their relationship with Ad Rock of the Beastie Boys, one of the most commercially successful acts of all time- with the Beastie Boy having moved from bass to producer- and cutâ€¦ an entirely non-commercial album.

Not that punk rock needs to fight against classic radio sounds- thereâ€™s certainly no rule that says punk rock canâ€™t be catchy or even poppy. But, Proud to be flaunted its early 80â€™s hardcore influences so proudly, the band was doing the exact opposite of the herd. Was it calculated or was it by instinct? The best bet is on the latter because these tunes just sound so righteous.

Embracing the low-fi buzzing of Minor Threat and Wasted Youth (and letâ€™s be honest, Pollywog Stew) DFLâ€™s second album tears through twenty tracks in about that many minutes. The band snaps between super revved up riffs and the famed low rumbling breakdown. You have to give credit to guitarist Monty Messex and bassist Tom Barta, who combine their instruments in front of the mix and max their distortion sound like a Harley-Davidson.

But, where the band separates themselves from their peers (and some of their inspirations) is the spastic-fragility heard behind the rumbling. Take â€œSourpussâ€ for instance. The tune is anchored in Bartaâ€™s fist-slamming bass, but while Barta carries the tune, Messex picks away at the bassâ€™ base with guitar lines that are constantly cracking, breaking down, and wandering all over. He flips between this spastic, cranking style and classic hardcore thrashing throughout the release, making these tunes classic in their homage, but unpredictable in practice.

Vocalist Tom Davis, who often goes by Crazy Tom, demonstrates why he got the nickname. Davis too is influenced by the early hardcore crew- heâ€™s wont to yell out random interjections, particularly at the ends of songs, like MacKaye, but heâ€™s equally likely to just get on mic and ramble like Darby Crash. The sinister groove of â€œWhatâ€™s the difference,â€ supplemented by Davisâ€™ reverbed ramblings, walks the fine line between enlightened sermon and Manson rambling.

And to that end, the band revels in the same sort of lyrical dichotomy as those early LA punkers. The band deals heavily with political-issues as seen on a hyper local scale (ala Black Flag). â€œGood cop, bad copâ€ and â€œSocietyâ€™s pressureâ€ deal with making it in the modern world, as directly seen through the eyes of a pent-up, confused youth. But, conversely, like a lot of early hardcore, the band isnâ€™t afraid to exhibit the fun of pure goofiness. â€œProud to be DFLâ€ is a classic punk battle cry that includes the bands name. Meanwhile, the band sprinkles short skits throughout the release, such as silly stage banter and other random escapades.

Yet, despite the bandâ€™s obvious influences, this isnâ€™t a retro record. Really, it just sounds like four guys tearing through some angry/fun songs as hard and as wildly as they can. This record isnâ€™t four guys trying to relive the past decades, rather, itâ€™s four guys from an earlier decade doing what comes natural to them. If anything, this is an honest record. If only all punk rock could say the same

The Epitaph/Burger reissue seems to punch up the sound on Proud to Be without messing around too much with the albumâ€™s actual substance. Itâ€™s as raw and noisy as ever, with maybe just a hint more clarity, which reveals the recordâ€™s little eccentricities hidden throughout. A well-done reissue of a record that deserved some more focus. Kudos.