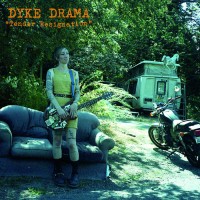 For an odd look into the current state of our insular little music community, look no further than the very recent history of G.L.O.S.S. The band got their largest swath of media coverage when another band (not going to name names, but it rhymes with "Whirr") threw some transphobic "jokes" up on Twitter about members of the band "wearing dresses" and so forth. The since-deleted tweets were splayed across the internet and calls for the offending band to be dropped from their label(s) were both shouted and answered. New Twitter accounts were created, excuses were made and defenses were erected. And, somewhere in the ever-growing and weirdly national clusterfuck, was G.L.O.S.S's music. Their releases were getting to more ears, and rightly so, but it was not because of its quality, but because some band/associate of a band unleashed some idiotic comments into the internet ether. More people got to hear the music and know the band members, but it was through the ugliest highway possible. So, when Sadie Switchblade of G.L.O.S.S. releases an EP under the name Dyke Drama, it's easy to say the title is a little too on the nose. Yet, given the weird, recent and the unfortunately common events that occurred over Twitter, the brash nature of the name proves to have some purpose.

Anyway, onto the music. Contrasting Switchblade's work with G.L.O.S.S., Dyke Drama takes more than a couple of cues from Paul Westerberg and lands somewhere near the realm of more recent acts like Hard Girls. For the most part, lyrics focus on relationships and identity and mid-tempo Replacements-esque instrumentals abound. The tracks are as catchy as they are wounded, bruised and defiant. At some moments, however, Switchblade becomes dull and takes a misstep.The rough strewn balladry of "Thelma & Louise" stretches a bit too far and dips a few too many toes into the overly melodramatic. Tracks like "Hardest Years," the bouncing "I'm Just Saying" and the raw, confessional "Crying in a Bathroom Stall" find the singer-songwriter in a much more comfortable mode.

Now that more are eyes on the members of G.L.O.S.S. than ever, it's a relief to see that the creative forces in the band aren't suffering from stage fright. Tender Resignation sounds broken down, dusty as hell and, above all, Â warmly confident.

DFL: Proud to Be [Reissue]