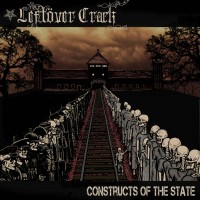 A lot was at risk with this record. After such a long time without writing new material, would it hold up with the classic Mediocre Generica and Fuck World Trade? Would it be the same Leftover Crack that we all know and love or with Ezraâ€™s departure and newly added members, would the new songs make them sound like a completely different bandâ€”or even worse a caricature of what they once were?

The stakes were high when Sturgeon and company decided to write Constructs of the State, but with high risk can come high reward and that is exactly what happened here. They hit the jackpot. And with a long list of punk rock icons and allies like Jesse Michaels of Operation Ivy and Classics of Love, Penny Rimbaud of Crass, Joe Jack Talcum of The Dead Milkmen, and Kate Coysh of Reivers, plus members of The Bouncing Souls, Dark Dark Dark, Blackbird Raum, Mischief Brew, Days N Daze, Chewing on Tinfoil, The Riverboat Gamblers, Rats in the Wall, and Intro5pect lending their talents to help with this project how could Leftover Crack have gone wrong?

Despite the changes to the line up of the band, Constructs of the State shows that they very much pushed themselves to make it sound different compared to their other releases and experiment by going in a much more sonically hardcore and lyrically blunt and confrontational direction, while still staying true to their overall original sound.

You immediately get the sense that hardcore will play a much bigger role on Constructs of the State than the other full-lengths because of the intro song â€œArchaic Subjugation,â€ which is mostly comprised of a â€œvery familiarâ€ descending chord progression and Sturgeonâ€™s (as well as the other lead/guest vocalist) signature high-pitched, crusty screaming.

â€œArchaic Subjugationâ€ perfectly transitions to one of the stand out tracks on the album called â€œDonâ€™t Shoot.â€ Judging by the very ominous intro in this song, you know that Leftover Crack definitely means business here. This anthemic tune is the band at its finest. Thereâ€™s great use of octaves from one guitar while the other plays a crunchy rhythm. The bass is heavy, yet full of treble and the drums are tight and slammed hard. Sturgeon yells politically and socially conscience words and a chorus-like group of singers come in to back him up during the chorus. The band did an excellent job with this track by drawing historical parallels with lyrics like â€œLike Custardâ€™s Stand/ On stolen land/ Meet Crazy Horse/ With lethal force!â€ in one of the verses to the contemporary instances of police brutality that we see today with the lyrics, â€œDonâ€™t shoot â€˜til you see the whites on their skinâ€ in the chorus.

Leftover Crack does not only bring their A-game with their anthemic songs on Constructs of the State. They also bring it with their new ska-punk material such as the anti-corruption track â€œCorrupt Visionâ€ and the anti-sexism track â€œÂ¡Poliamor Fiesta Crack!â€ Though itâ€™s one of the shortest of the thirteen songs, â€œCorrupt Visionâ€ perfectly exemplifies, not only how great of a bassist Alec Baillie truly is, but also how hardcore-leaning this record is. The verses are made up of the classic ska that Leftover Crack is known for, but the choruses are drenched with fuzz and overdrive, and sounds so thrash-y that it almost comes off as a ska-death metal song.

Typically with each new Leftover Crack record there is bound to be a cover of a song from Sturgeonâ€™s previous bands like No Commercial Value or Choking Victim or Era Kireâ€™s band Morning Glory. There are covers on this album, but not from any of those bands. The first cover is â€œLast Legsâ€ from the album Destroying by Blackbird Raum. Listen to this bandâ€™s version (that whole album is a great really) just so you can hear the immense amount of work that went into transforming what was an extremely dark and folky track, into a very daring crust punk anthem. Leftover Crack condensed the song, but more notably rewrote the leads parts that are originally played on a mandolin and a banjo for the distorted electric guitars play instead.

The other cover on this record is â€œThe War At Home,â€ which was originally on Intro5pectâ€™s Realpolitik! (also a great and underrated release). There are several reasons why it made a lot of sense for Leftover Crack to cover this -- the first being that Sturgeon does guest lead vocals on the Intro5pect version. Also, the newer members of the band Donny Morris (drums) and Chris Mann (guitar/vocals) are both in Intro5epct as well. And with lyrics like â€œHiding in shadows, here comes la migra/ Two days in the desert, here come the pigsâ€ this track fits in perfectly with the rest of Leftover Crackâ€™s catalogue. It was a â€œno-brainerâ€ for them to adopt it really. However, what sets it apart from the rest of the bandâ€™s songs is how the arrangement is centered on a very synth/electro-heavy lead. In terms of the version on this album, Leftover Crack pretty much left this song alone, which was the right thing to do. Adding anything else to it probably would have been overkill, but this versionâ€™s production quality is noticeably better and much clearer compared to the original.

In a statement Sturgeon made to the Fat Wreck Chords about Constructs of the State he explained, â€œI have been working on the songs for this album since I wrapped up production on the third Star Fucking Hipsters record in 2011. My only concern (with releasing) a new Leftover Crack LP was that it had to be as good as our first two full-length efforts. I wasnâ€™t going to put a new record together until I felt like that standard was met.â€ Well Sturgeon, you more than accomplished your goal. For those of you who were hoping for a new Leftover Crack album to come off as Mediocre Generica â€œPart 2â€ or Fuck World Trade â€œPart 2â€ that would have just been repetitive and boring for us to listen to and probably even more so for the band to write.

When you look at Leftover Crackâ€™s discography, the beauty of the first two full-lengths (and now this one) is that not only are the lyrics incredibly well written and provocative and the instrumentation is masterfully played, but also those two releases are just different enough from each other to keep things extremely interesting, while still sticking to their unique style of mixing punk rock, ska, and metal with crusty vocals that scream lyrics that are hell-bent on spreading the message of annihilating racism, sexism, trans/homophobia, police brutality, environmental degradation, corporatism, war and everything else the members of Leftover Crack have been fighting against since the bandâ€™s inception (during the Choking Victim years, too and even before). They still do all of that on Constructs of the State just as well, if not better in some instances, as they did over a decade ago.