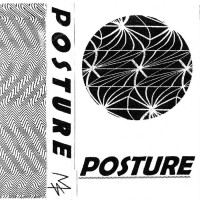 Posture is an exciting young band from St. Louis, Missouri. On their first proper EP, Never Knows Best, the band debuts with a strikingly focused sound and aesthetic.

Opening track â€œ2â€ sets the tone for the release. Dual guitarists Allison Durham and Nick Goldschmidt smash their reverbed, distorted lines against each other creating a noisy, clanging mass that feels like a slow descent. The intentional chaos of a band like Sonic Youth is abutted against the bold, flowing lines akin to the Pixies. Then, the whole thing is then covered in a modern feedback-heavy sheen.

Meanwhile, Goldschmidt howls in the kind of anguish trademarked by post-punk. Thereâ€™s a bit of gang of Four and bit of Wire in his delivery- and maybe a little Ian Curtis- and the result in a cagey cadence that wavers between a detached cold and red, hot heat. This kind of rapturous delivery can be what makes or breaks a band- the crew rising into a sort of unpredictable, enthralling mass or descending into bland, white noise. Here, itâ€™s the former, thanks in part to drummer Shawn Durham (twin sister to Allsion) who keeps the beats hard and fast. Texture and mood is nice, but if you donâ€™t have a muscled up chassis to support the rig, all you get is dough. Shawn Durham knows this and gives her two bandmates plenty of power to work off of.

Likewise, on â€œPlaceâ€ and â€œAvoid,â€ Allison takes the mic and conjures a sort of Slumberland Records vulnerability. She up front in her intonation without being mawkish. So many artists try to forge a sort of identity through the way they sing, without focusing on what they are saying. Here, Allison flips that flop and gives a straightforward, if somewhat sly, delivery while painting abstract visions. It works quite well, especially when her call is supported by a spiraling, thrashing guitar line.

The release closes out with an excellent cover of the rare-ish track â€œJanitorâ€ by Suburban Lawns, and that choice tells you most of what you need to know. Here is a punk band thatâ€™s not afraid to embrace the art-y side of things but avoids coming off as pretentious. This is a clever, intriguing, promising debut. I expect great things from this trio.