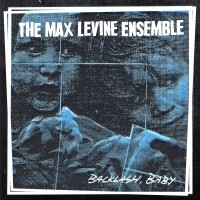 Whenever a well respected band, like Max Levine Ensemble, takes time off to work on other projects, fans are always disappointed. In the case of David Combs aka Spoonboy when he decided to stop performing under his solo moniker to get the band back together, he faced fans who were both disappointed and excited by the news. While the fans who were disappointed to lose the more intimate feel of Spoonboy have every right to feel that way. Max Levine Ensemble's Backlash Baby is an album that shouldn't disappoint anyone who considers themselves a fan of high energy pop punk.

The drum fill that leads off the album open, which is also the title track, sucks you in immediately. Listening to the lyrics, you get a sense the song is about the Max Levine Ensemble's return and the the retirement of Spoonboy. The lyrics touch on situations that seemingly lead to near mental breakdowns, giving the sense that the change in musical scenery wasn't just one of musical direction but of needing to be in a different space mentally to keep the world Combs had built from crashing down around him. While not the most original topic to ever write a song about, Combs's lyrics and vocals allow for a fresh take on the topic. All the while bracing pop-punk keeps the song moving and the listener engaged.

The album continues along this same pace for the majority of its thirteen tracks, never sounding tired or boring just great pop-punk with great lyrics and vocals. No matter the topic Combs has the ability to write a compelling lyric and utilize a unique delivery style that keeps the listener engaged. Tops tracks include â€œBorn at the Wrong Time,â€ â€œPanoptic Vision,â€ along with â€œBig Problems, USAâ€ which, along with the phenomenal drumming throughout the album, shows how solid of a rhythm section the band has. Another highlight from the album, â€œShadow of Deathâ€ takes a page from the 90's pop-punk playbook by throwing a ska track in the middle of the album. While genre hopping is nothing new for these guys, the perfectly executed nostalgia this track brings about is admirable. The song itself is also rock solid as it deals with mortality and features one of my favorite lyrics from 2015,â€No person who seeks to escape it, should be treated with trust by the living. Still the shadow of death keeps me moving.â€

Throughout the album, you hear moments where the band reminds you of everything from The Wonder Years to Bomb The Music Industry! While they've been around long enough, that resemblance is likely a sign of their influence, I feel safe in saying they wouldn't be afraid to admit some of their peers have rubbed off on them as well. This is a solid release, and you can't tell the band stepped away for any time what so ever. The melodies are there, the band is tight, and the vocals are on point. The Max Levine Ensemble proves once again, no matter what Ben Weasel says, they're a great band.