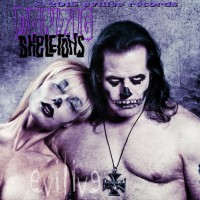 â€œLook into my eyes youâ€™ll see who I am/My name is Lucifer please take my handâ€. Itâ€™s almost like Glenn Danzigâ€™s entire career has been leading up to this moment, and some career itâ€™s been. Very few artists can claim to be a fraction as pioneering or influential. Danzig is the proverbial black cat with nine lives. Horror punk. Goth/deathrock. Blues metal. Occult metal. Classical. Cartoon metal. Horror punk revisited. Goth/deathrock revisited. Now, crooner, interpreter of the songs of others. Can a residency in Las Vegas be far behind?

I canâ€™t remember the first time I heard the Misfits. Itâ€™s almost as if those familiar songs and that classic skull logo have always been part of my consciousness. I do remember seeing ads for the first Danzig album in Thrasher, and hearing it for the first time. I remember my mind being blown by the music of Lucifuge and how the CD booklet unfolded into an upside down cross. I remember going to the record store at midnight to buy How the Gods Kill (Ministryâ€™s Psalm 69 came out the same day). I wish I could forget how bad the fifth album was. I remember each of the dozen or so times I saw Danzig live, including twice with Doyle playing Misfitsâ€™ songs (and one Samhain reunion). For some reason I canâ€™t entirely explain, I was really looking forward to the long-rumored covers LP.

There were reasons for me to be optimistic about Skeletons. Glenn assembled an all-star line-up for the project. He was joined by long-time collaborator and Prong main man Tommy Victor on guitar. Former Type O Negative member and goth-metal star in his own right Johnny Kelly played drums. One time Samhain drummer and sometimes Danzig bassist Steve Zing also plays on the record. His role is not entirely clear, as Danzig himself is credited on bass (and even on some of the drums). In general, Danzig albums have been steadily improving since they hit rock bottom with 1996â€™s Blackacidevil. The man and the band seemed poised for a late career upswing.

Misfits fans will undoubtedly be thrilled to see the cover photo. Danzigâ€™s make-up certainly looks like a throwback to the days of â€œHorror Businessâ€ and â€œWhere Eagles Dare.â€ Opening track â€œDevils Angelsâ€ definitely has a Misfitsâ€™ feel. Itâ€™s the punked-up, noisy, feedback laden theme song from the 1967 biker film of the same name. â€œSatanâ€ is also from a cult biker movie. This time itâ€™s 1969â€™s Satan's Sadists. The raw production doesnâ€™t hold up as well on the bluesy ballad, as there is almost no mid-range. Itâ€™s clearly an attempt to create a retro sound, but it doesnâ€™t really work. Danzig has always worn his love of Elvis on his sleeve. It should come as no surprise that his Elvis cover is one of the strongest tracks on Skeletons. Tommy Victorâ€™s industrial riff powers the golden oldie that is â€œLet Yourself Go.â€ After Danzigâ€™s howl, Victorâ€™s chugging, squealing guitar is the albumâ€™s most prominent feature.

â€œNIBâ€ might seem like too obvious a choice for this record (see lyrics above), but Danzig pulls it off. They slow it down a bit, add some epic percussion, and chop off the extended jam at the end. Itâ€™s a solid take on Black Sabbathâ€™s 1970 classic. Danzig even manages to make an Aerosmith song decent, which is no small feat. â€œLord of the Thighsâ€ is greatly improved by the heavy metal treatment. â€œAction Womanâ€ is a cool song by a band that Iâ€™ve never heard of called The Litter. Even Danzig canâ€™t save â€œRough Boy.â€ It was lousy when ZZ Top did it, and itâ€™s lousy now. â€œWith a Girl Like Youâ€ and â€œFind Somebodyâ€ are two more oldies by The Troggs and The Rascals respectively. Theyâ€™re both pretty good, better than similar attempts by the Jerry Only-led Misfits on Project 1950. The relatively short 35-minute album wraps up with The Everly Brothersâ€™ â€œCrying in the Rain.â€ Itâ€™s well done and can hold its own with Danzig ballads like â€œBlood and Tearsâ€ and â€œSistinas.â€

Overall, the production on Skeletons is not great. It has that uneven feeling like it was recorded piece by piece over the course of months or years. The content is mostly good, especially the more obscure choices. This record occasionally approaches greatness, but just canâ€™t sustain it. Danzigâ€™s image has taken its fair share of abuse, but his legacy is undeniable. This does nothing to tarnish it. At the very least, it shows us that Glenn is still capable of a sense of fun. If youâ€™re a Danzig fan, youâ€™re going to buy this no matter what I say. If youâ€™re not a fan you need to listen to Static Age, Walk Among Us, Danzig and Lucifuge. Hearing is believing.