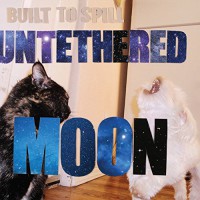 Untethered Moon is another example of why Built To Spill remains one of the most unheralded, under-the-radar and underrated indie-rock acts ever to grace the scene. With Dough Martsch at the helm, doing what he does best and most passionately, BTS lay down another exclamation mark that's right up there with the band's previous albums. Martsch's solo work over the last couple years found him tortured and pained but BTS always represented that outlet of optimism and this here's no different. It's a sigh of relief and Untethered Moon finds Martsch with more direction, feeling reassured and this flows into a sound that's relevant to say the least.Â


Of course, there's the haunting sharpness and melancholy that makes BTS emo at times but in a more indie/alt aspect. The music here though comes alive as a band that loves it and loves making it. There's a lot of comfort to be gained from the jangly anthems on hand and melodies rumbling on with some of the most arresting solos I've heard this year. Not surprising given that BTS have always crafted such an earnest '90s sound. But through lineup shifts, the passing years haven't dimmed the band's impact. They always find a way to reconfigure the plan. As the band reins it in, it's one that's settled into their sound while tinkering around a certain familiarity. The start-stop jam of "Living Zoo" and tracks like the melodic "On The Way" clearly define just why they influenced acoustic/modern acts such as The Front Bottoms, Restorations and Typesetter. Refreshing yet restrained. They way they hover over slow-burns ("Hover To Cliff") to the majority of mid-tempo tracks on tap, well, let me just say it lives up to expectations. Whether it's rock songs chock-full of reverb, haze or distortion, at the end of the day Untethered Moon is another well-assembled, guitar-driven gem that will continue to keep Built To Spill as fresh and alive as ever. Â Snappy rhythms and unrelenting storytelling. Can't go wrong with these seasoned war horses.Â