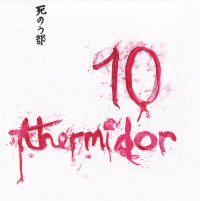 I have to preface this by saying that Iâ€™m a massive Shinobu fan and have thus been waiting for 10 Thermidor in some respect or other for years. My first impulse is to slap five stars on this record and call it worth the wait, but Iâ€™m exercising restraint.

â€œUntitled Michael Haneke Projectâ€ opens with palm-muted guitar and a deceptively cheerful melody to go with lyrics about being left behind with your values when everyone around you is making money and moving forward, before busting out on the strength of a classic Matt Keegan guitar sound into something raucous and off-kilter. Mike Huguenorâ€™s existential holler on the refrain, â€œDoes it ever pay to be true?â€ sets a tone for the rest of the album, one of fear and discomfort barely concealed beneath a pasted-on smile. It sounds like narration from a horror movie protagonist whoâ€™s been dropped without warning into a Wes Anderson film and canâ€™t stop waiting for the other shoe to drop. This theme continues through â€œ2Tone Tuesday,â€ one of the albumâ€™s best tracks and one where the horror movie feeling comes through the strongest. â€œSame dream again/The one where I can taste the blood in my throat/and as it lurches toward the end, you drop the saw and you walk away/ from the mess we made/as I gasp for breath in the colonnades,â€ Huguenor mumbles and then shouts, a crescendo of unease.

â€œThe Voidâ€ and â€œCulture, Inc.â€ return to the fear of selling out, perfectly summed up on the latter track by guest vocalist Rosalie Riveraâ€™s sleepy chorus, â€œThey're gonna tell you if you buy in everything will be fine.â€ Here, the distrust of commercialism and the sense of existential dread merge into one, and the horror narrative begins to clarify into something unpleasant and familiar to a whole generation weighted down by student loans and apparently useless degrees.

â€œViolence House,â€ a track re-recorded from a split with Phatâ€™Nâ€™Phunky Records peers The Albert Square, feels like the sonic and thematic center of the record, an account of the moment the horror film protagonist emerges into the sun and rejoins normal life. The vocalizations on the bridge are complemented by a slow, dreamy horn part that recalls the strongest parts of Shinobuâ€™s previous releases. Unfortunately, here the album loses steam. The track â€œJokesâ€ takes the place that was sonically held by â€œAmor Fatiâ€ on Shinobuâ€™s last record, Strange Spring Air, but while â€œAmor Fatiâ€ was similarly fuzzed-out and noisy to â€œJokes,â€ the latter track feels like a placeholder in a way the former didnâ€™t. It doesnâ€™t keep the musical or lyrical thread of the album, and although it feels like thereâ€™s an attempt at a message, itâ€™s ultimately dead weight on a record that is solid but not great enough to carry it.

â€œMelbourne Cupâ€ at least rejoins the same realm as the rest of the album, although the first half of the track sounds so much like Joyce Manor that itâ€™s difficult to accept that it is actually still Shinobu. The switch from the ultra-articulate vocal style of the first half of the record to this sort of dead-eyed jawing is distracting and doesnâ€™t really serve the song, which gets much, much better when it starts to sound like Shinobu again on the second half of the track, largely occupied by a Weezer-esque droning guitar part and the refrain â€œFront and center in the pictureâ€ as it fades into noise and static. â€œ9 Thermidorâ€ opens with a small showcase of Jon Fuâ€™s drumming, a low-key star of this record. He and bassist Bob Vielma provide a low counterpoint to Huguenorâ€™s relaxed tenor, which sounds almost off-key until the song crescendos into a full-fledged wail as Huguenor sings â€œAnd if you stand where Iâ€™m standing now, you can hear the future coming down/It makes this terrifying sound.â€ The fade into the beginning of â€œBack to the Voidâ€ is reminiscent of Reconstruction Site-era Weakerthans, with guitars that chime and drone in turn and a repetitive bass line. The latter track feels more like the segue between â€œ9 Thermidorâ€ and â€œHell Screensâ€ than it does a fully-formed song, but in this case, it works well. Shinobuâ€™s songs have always worked best when heard as parts of a whole, with recurring leitmotifs and lyrical themes. â€œHell Screensâ€ and â€œ10 Thermidorâ€ sound the most like Shinobu songs, Huguenorâ€™s almost sing-song delivery of the line â€œOne eye sees the world while the other one's stuck in dreams, and it's all the superimposition of hell screensâ€ being the most Shinobu moment on the whole record.

On â€œ10 Thermidorâ€, a droning, dreamy, 6-minute epic, we find our protagonist introverted and resigned to his fate. â€œAnd I can hear a new age coming down the line but it sounds the same,â€ he sings, and thatâ€™s pretty much the tag-line of the record. Shinobu are back, and maybe not better than ever, but theyâ€™re still the band I loved in high school. Iâ€™m looking forward.