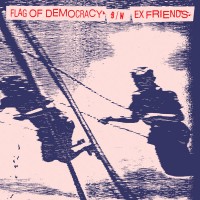 Acting as sort of a companion to the recent F.O.D. / Dead Milkmen split, the Ex Friends / F.O.D. split also acts as a lesson in the effectiveness of juxtaposition. Whereas the Milkmen split compared how two old cronies can take different paths to essentially arrive at the same (conceptual) destination, this split shows just how different band lifelines can be.

The Ex Friends half acts as an obituary, with the band having broken up last year. But, wow! What a way to go out. The Ex Friendsâ€™ mastermind Joel Tannenbaum stated that he had hopes for Ex Friends to sound like a cross between Conflict and Leatherface and boy does the band nail that here. â€œLazer Eyesâ€ is swinging, bouncy rocker. Propelled by a fat bass, the song morphs a negative tale around a surprisingly sunny beat. The core of this machine is catchy as hell, but the icing on the cake is the backing vocals of Audray Crash and Leta Gray who give it the Greek choir treatment with a sweet innocence that, as the song crashes at its end might not be so sweet. Ex Friendsâ€™ last ever track, â€œStrangers,â€ which might be self-referential, finds the band in an introspective mood. But, unlike so many other downcast songs, the band again flips the table by building the sad tale on the back of an uptempo rocking beat. The band flies out the door in style, paying homage the swinginâ€™ 50â€™s rockers along the way and few bands have had better exits.

Meanwhile, Philly stalwarts F.O.D. slam out three new tracks. The band has umpteen releases to their name, but somehow, each release sounds focused and meaningful to the band. â€œFan Serviceâ€ finds the band juggling their trademark wacky, snot nose hardcore with just a hint of bay area pop punk. Itâ€™s a little more chaotic than the Berkeley stuff, but the inherent embrace of melody is there under all the shattered glass. In contrast, â€œPep Squadâ€ is a straight up punk thrasher, exemplifying the fact that if this band is faced with the nice and nasty, they rather go for the nasty. â€œWe Can Be Stupidâ€ has a sort of dark humor to it, that a lot of modern punk misses. Instead of scowling and spitting like so many others, F.O.D. salute mankindâ€™s shortcomings and decide to party as the ship goes down. If you think about it, that really is sort of a higher level of thinking than bland political treatise.

What binds this release is the opposite trajectories of these bands. Ex Friends flared up and were gone in less than 36 months, leaving a healthy, but not huge, discography in their wake. Meanwhile, F.O.D. are about to hit their 34th year and 1,357,257,972,469,574th release. Both bands are respectable for their actions. Ex Friends used up what they had and moved on. F.O.D. hammered ever forward, forever searching for that new angle and new song. As I said before, thereâ€™s no one way to play this punk rock thing and both of these bands do what they do (or did what they did) very well.