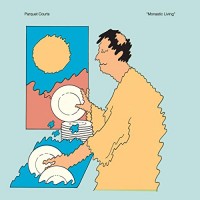 For those of you that haven't caught up with the Really Red reissues released earlier this year (and why haven't you?), you'd be missing out on an important sonic influence on the sound of Brooklyn by way of Texas band Parquet Courts. Especially in mid-era recordings, the similarities are uncanny, the only difference being Parquet Courts' more freewheeling lyrical gymnastics in place of the harsh political decrees found on Really Red's most affecting songs. Monastic Living, however, does away with any sort of comparisons. Instead, they build a repetitive collection of indulgent exercises. The results play out like watching someone stretch their hamstrings for half an hour.

Other than the (admittedly solid) opener "No, No, No!" the songs are mostly half sketched instrumentals or lengthy, looping interludes like the dull title track. "Vow of Silence" has a certain serene aura, but it also plays out like a demo recorded by a teenager after he stumbled onto Harmonia for the first time. "Monastic Living II" makes an appearance for the masochists who didn't get enough of the instrument wanking the first time around. The rest of the 32 minute EP follows suit, "exploring" the same terrain both in limited terms (the 72 second "Poverty and Obedience") and in more exhaustive ways (the 8 minute, flat Yo La Tengo on a bad day-esque "Prison Conversion").

It's not too difficult to see why the band would want to shake up their sound. Even with last year's more raw, rattling Content Nausea (recorded under the name Parkay Quarts), the band was getting stuck in a rut. They were shirking progression and spinning their wheels, so it's actually a positive sign that they're challenging themselves. However, it's hard to remain positive when the music is this rote and boring. Hopefully the band has learned their lesson and found a way to affably unite their previous song craft with their newfound focus on formless repetition.