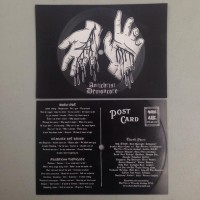 To Live a Lie

When ACxDC started putting out merchandise, mainly shirts, that started selling relatively well due to the fact that they were funny and avoided the standard dead-bodies-and-skulls clichÃ©s, the genre â€œpuristsâ€ immediately attacked the band, accusing them of being phonies, of not truly â€œgetting itâ€, of being commercial, and just generally being not in it â€œfor the right reasons.â€ So, what did ACxDC do? They ramped up the production of their goofy shirts and expanded their merchandise to include pencils, pajamas, kids bibs, and even a limited run sex toy (a tee hee hee!) Extreme punk is not above whimsy and to prove that fact, the band has just released an EP on a for real postcard. You could literally mail this if you wanted.

â€œBurnoutâ€ shows just how nuanced this band can be despite their minute long grindish blasts that include screeching and screaming. The band makes the argument for assisted suicide, at least for the elderly. The band, much like a famous Morrissey, quite, makes the argument that maybe ending oneâ€™s life in the face of a slow growing ruination has its merits. Like the band, itâ€™s daring.

But, just as things seem serious, the band rips out â€œScience Ist Kriegâ€ which is just a paean to how much they like popular culture scientists like â€œNeil DeGrasse, he kicke some ass!â€ But like most of the bandâ€™s silly songs, thereâ€™s actually a serious message underneath the wackiness- a plea for dedication to reason.

â€œMindless Violenceâ€ closes out the release. Again the band contrasts their hard, explosive sound against a nuanced statement. After a Crass-ish static opening, the band drops into a death metal rumble before pondering if merely living in a capitalistic system inadvertently makes one responsible for global harms. If anything, the tune and the release as a whole shows a certain level of thought and care going on here, as well as a willingness to question both the established thought of mainstream society, as well as tiny punk subcultures.

Plus, if you donâ€™t like it, you can repurpose it and mail a nice little note to your Grandma.

Fucked Up: Year of the Hare