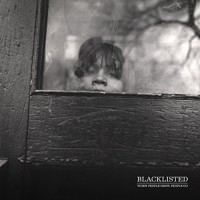 At this point in their collective life, Blacklisted are who they are. They have been playing and thrashing about the stage for some years now. What always, beyond all else, keeps this band relevant though are their studio albums. For those less familiar, Blacklisted are committed to pushing the underground envelope every time they offer up recorded music. From the bandâ€™s infancy and utterly hardcore efforts on Our Youth is Wasted through their far more dissonant and grungy efforts on No One Deserves to be Here More Than Me, Blacklistedâ€™s commitment to musical development and introspection have kept them not only important but itâ€™s also kept them compelling. Their latest offering, When People Grow, People Go, is no different.

While a first listen might suggest that the band is returning to their more straightforward hardcore sound, thatâ€™s not truly the case. Yes, there is an attention to that style. â€œRiptideâ€ has everything in the chugging guitars and crashing symbols that were representative of earlier Blacklisted. Even the vitriol in the songâ€™s lyrical content seems a bit less meditative than more recent releases. But what develops here is a more diverse record overall. Whereas it seemed that previously Blacklisted developed their sound per record, what is showcased on When People Grow, People Go is a band much more comfortable drawing on the amalgamation of sounds and lyrical content theyâ€™ve developed over the years.

Consider â€œGossamer,â€ the albumâ€™s fifth track. The song has elements of both a hostile and ill-tempered hardcore song and the more complex guitar leads and chord patterns found in the bandâ€™s more recent recordings. Even Georgeâ€™s lyrics and vocal deliveries evidence what is essential a hybrid sound. He speaks candidly of family issues and deep personal pain, delivering the message with his tormented screams. However, he also weaves in layered vocal patterns allowing his spoken voice to complement those screams. Similar vocal experiments are evidenced on â€œForeign Observerâ€ as George pushes his melodies throughout the song, especially mixing that melody over some of the more dissonant guitar riffs on the track.

To be sure, there are some songs that will satisfy the more ardent of hardcore traditionalists. â€œCalendarsâ€ and â€œInsularizedâ€ certainly beckon to that traditional style ala Heavier Than Heaven, Lonelier Than God-era Blacklisted. However it is in the title track of this new record, â€œWhen People Grow, People Go,â€ that the listener gets the full bounty of the Blacklisted experience. Aptly placed as the recordâ€™s final track, the song is smoldering with pain and discomfort. The guitar work opens with a riff that could, without distortion, sound like something from a garage rock record. And yet, it moves into a darker and agonizing place as Georgeâ€™s lyrics bring the listener into the gloom of his ever-present interpersonal struggles. The song and, ultimately, the record end on the discord of the guitarâ€™s distorted feedback. And it left me very much content as a fan and listener.

Blacklisted are a band beyond rebuke given their musical genre. If punk and hardcore are more than just sounds and lyrics, and truly about progression both inward and outward, then we have a great modern example in these gentlemen. Their latest record is not only remarkable in the bandâ€™s overall canon, but itâ€™s great also in its own way. When People Grow, People Go is a truly exemplar offering of how hardcore music allows for experimentation, therapy, and even hope. A great listen from start to finish.