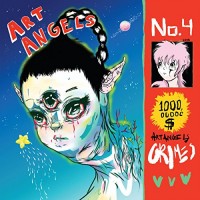 Pop art is no new concept. The pioneers of the form excellently combined their own artistic visions with iconic anti-art. The results were sometimes confusing, murky to the beholder. Other times, they stood on their own without the ironic lens. Art Angels is the latter.

On her new album, Grimes (AKA Claire Boucher) tries to ride the line between universally accepted and incredibly niche, but, ultimately delivers a pop record. After scrapping a full album and releasing â€œGoâ€ last year, it was clear Grimes was headed in a more mainstream direction. With 2012â€™s Visions, she scratched the surface while remaining a DIY cult figure. While still catchy, it was a more challenging listen. Art Angels goes full throttle pop without sacrificing her credibility. This isnâ€™t Britney Spears. It pushes the listener, chaperoning them into new aural corners untapped by the average top 40 fan. While firmly rooted in the radio friendly, genres shift from K Pop to 90â€™s electronica to Janelle MonÃ¡e-infused dance.

Sometimes the transitions seem jarring, but they fit into her master plan. Grimes remains the puppeteer, in charge of her lofty ambitions even when her choices arenâ€™t there to please the masses. â€œSCREAMâ€ is the most notable example. The track, produced by Grimes, is sung entirely in Mandarin by Taiwanese artist Aristophanes and released as the albumâ€™s second single. Itâ€™s a fun song, but one sure to keep her at arm's length.

If oddball dance music isnâ€™t your forte, there are plenty of straightforward numbers like â€œCaliforniaâ€ and â€œFlesh without Blood.â€ â€œKill V. Maimâ€ and the albumâ€™s best track â€œRealitiâ€ are the result of weird and mainstream hitting the perfect balance. All are big and appealing but with many layers, including a dark authenticity that doesnâ€™t usually appear in run-of-the-mill pop.

Thereâ€™s a lot to be said for someone altering the rules the way Grimes does. She leaves plenty to grab onto, but explicitly keeps her distance from normalcy. Grimes stays on the outside looking in, comfortable in her own ability to make the party move. Sheâ€™s self aware and independent. She proves pop doesnâ€™t have to be drab and, instead, can be thoughtful and boundary pushing. Art Angels exists for those who love pop but even more so for those who actively avoid it. Â