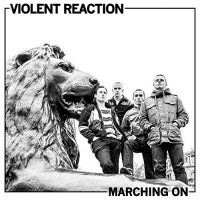 All too often contemporary hardcore bands donâ€™t really do a good job of distinguishing each song on their records. A lot of albums have songs that just sort of blur together and nothing new is really accomplished. There are many exceptions though. Ceremonyâ€™s Rohnert Park comes to mind. Ceremony really keeps you guessing with each track and each one is very distinguishable from the other. Itâ€™s definitely easy and a pleasure to sit through that record from start to finish. This is also the case with the UKâ€™s Violent Reactionâ€™s second full-length Marching On. If any straight edge act, or any hardcore act in general for that matter, deserves to have a lot of praise and recognition for their efforts in a time where hardcore can seem artistically stagnant, itâ€™s this band.

You can tell that Marching On was not recorded by a few guys who have just been playing their instruments for a few years. Violent Reactionâ€™s members are real musicians that have really pushed the bounds of where hardcore can go. The album is musically very smartly written and the lyrics are just as clever.

With 14 tracks on it, Marching On doesnâ€™t even make it to the 20-minute mark and with so little time, the band still got so much accomplished. The songs are rhythmically fast and aggressive, but they also arenâ€™t shy about to slowing things down either. This kind of â€œstop-and-goâ€ playing happens during songs such as the solo vocalist-based tune â€œImpactâ€ and in the more gang vocals-based â€œDisorder.â€ â€œImpactâ€ is insanely fast. The drums are relentless as is the very high treble and tinny, distorted guitar. But the guitar parts arenâ€™t just a few chords thrown together. The chords progressions are so that the guitarist will play one chord as bit of fill between the others and it works really well. The lead vocalistâ€™s voice is angry and yells the words with a ton of fury as if he is personally confronting the listener. About half way through this song, the band takes slows down considerably for a big build up that transitions into the very big chorus/outro.

Lyrically, the songs on this album are just as sharp as the instrumentation. The track â€œCrust Fund,â€ which you can just tell by its title that it is very quick-witted â€“ and it is. Lines like â€œCrust fund youâ€™ll never have to need/Youâ€™ll never struggle, youâ€™ll never bleed/ Crust fund you can afford/ Youâ€™re a fraudâ€ definitely proves that.

Violent Reaction comes out swinging -- and swinging hard on Marching On. This is a super-tight group of musicians who are clearly passionate about what they do and the messages they deliver. The members of Violent Reaction are clearly masters of their craft, and this album certainly illustrates that notion. As each song ends, you crave more. And with each following song they most certainly deliver. This is an outstanding record.

The Ramshackle Army: Letters from the Road Less Traveled