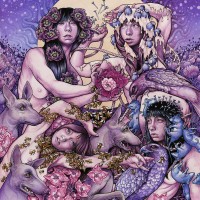 Baroness' Green & Yellow was an oddly prescient record, and not because it foreshadows Baroness' sound on Purple, but because its lyrical content referenced mental stress in the face of physical anguish. On album highlight "Eula," frontman John Baizley utilized his gravelly growl to say "When my bones begin to break / and my head begins to shake / it's my own blood" and, most vividly, "Can't forget the taste of my own tongue." After that album's release, Baroness, as many readers no doubt know, suffered a pretty severe (and highly publicized) bus crash. Among the resulting broken and fractured bones was Baizley's arm and leg. Many people would expect (and rightly so) that the lyrics on Purple would center around the band's near death experience, but oddly enough, their last album already covered very similar territory. The main difference is that, while Yellow & Green was sharply psychological, Purple is much more of a physical record.

The year after the bus crash, Baroness lost their able bodied and mighty rhythm section. Nick Jost and Sebastian Thompson fill in on this album and do a more than admirable job. Anyone who feels that drummer Allen Blickle's departure will leave a monstrous crater in the band's driving rhythm will be relieved to see that Trans Am's Sebastian Thompson is more than capable to fill Blickle's demanding shoes. Anyone who has seen Trans Am live (and if you haven't, what's wrong with you?) should know that Mr. Thompson is quite a beast behind a drum set. If you don't believe me, just take a listen to the cymbal heavy percussive gymnastics on late album track"The Iron Bell."

Those expecting PurpleÂ to be a mixture of Red and BlueÂ may be disappointed, as this albumÂ sees the band going where their past handful of releases have inferred. That is, Baroness are entering the mainstream metal/alternative rock sphere. While tricky, band's like Mastodon have safely navigated that terrain and, appropriately enough, this album sounds a bit like Blood Mountain at times. Opener "Morningstar" is as epic and throttling as a song called "Morningstar" by Baroness should be. And every chorus aims to be anthemic, with each track swinging for the fences with a big, meaty hook. And, with the exception of the miscalculated "Try to Disappear," the band are able to pull it off.


The synthetic waves and blurry smears of atmospheric smog are where producer Dave Fridmann's fingerprints can be found. For the most part, he makes his signature, sinewy touch a light one. A swirling synth string section here and some small bells chiming there, but for the most part, the mammoth guitars and scratching vocals are upfront and stomping all over everything. At the beginning of tracks like "Shock Me" and "Try to Disappear" it's calm and serene before a guitar riff kicks the sonic door down and takes the lead. Just a couple years after their recovery, Baizley and lead guitarist Peter Adams still have a steady, but punishing hand when it comes to sludgy riffs.

Tracks like "Kerosene" and "Desperation Burns" are pretty much dripping with melodic audacity, making "Chlorine & Wine" the obvious outlier. Oddly, it was also the first track from PurpleÂ to be released to the public. Even though it sonically misrepresents the record, the lyrics deal heavily with the oft mentioned bus accident in a straightforward fashion, with the titular chlorine & wine being compared to the sweet (in context and retrospect) taste of painkillers. It's a track that is simultaneously odd, bleak and hopeful in tone. While it may take some getting used to among the storm and thunder of the other tracks, it soon becomes readily apparent that this is easily one of the band's greatest accomplishments. It's lush, aching and strangely sweet, with no sudden gearshift guitars to keep your attention. It simply grabs you with an odd flowing nature and doesn't let go.

With the exception of odd album closer/audio snippet "Crossroads of Infinity," Baroness make sure their fans know the three and a half year wait was worth it. Â It's a brash and triumphant record from a band that had every reason to be everything but.