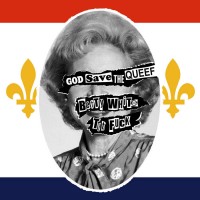 Wait -- Dante Graziani, PEARS' tour manager plays drums in a hardcore band? You have my attention. The band that I am referring to is New Orleans' own Betty White Tit Fuck and the band released their first full-length, God Save The Queef in early 2015. Not only is the album title (and obviously the art work, too) clearly an homage to the Sex Pistols' anthem, but it is also a tribute to the chaos that the Pistols advocated in their music, but in a funnier, grosser, and hardcore sounding way. The band even claims that they "put the F in art."

Of the nine songs on this release, six of them don't even make it to the one-minute mark. The track "Nut Bag" has a fifteen second intro and two seconds of music on it. But there are more "serious" songs on this album. "Butt Fart" is one of the few songs that actually break sixty seconds. After a faulty first try, the band gets the song going with some gang vocals screaming the title. The lead vocalist shouts disgusting lyrics like "Don't you want to taste it man?/ Even let you smell my hand" while the gang vocals come back in to shout "Butt Fart! Butt Fart!" in between his lines. On the musical side of things, the guitarist makes great use of his feedback when the rhythm gets chopped up during the choruses and the drums are noticeably slammed hard in this track and through out the album.

God Save The Queef is silly and immature in a great way. This is the type of punk rock the scene could use more of -- punk rock that doesn't take itself too seriously. The album is a quick listen, but it is filled with shenanigans that punk rockers can definitely appreciate.