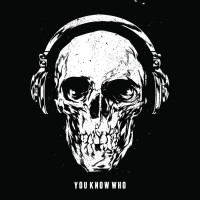 You Know Who is a power trio from Palm Desert, California made up of Mike Pygmie (guitar/vocals), Dylan Brown (bass) and Greg Saenz (drums). They have been around since 2009, although Iâ€™ve only recently learned of them. This is their long-awaited debut LP for Self Destructo Records. The sound is a nearly perfect marriage of hardcore and stoner metal. Itâ€™s driving and aggressive, but retains the tunefulness of 70â€™s hard rock. Itâ€™s exactly what youâ€™d expect from members of The Dwarves, Mondo Generator and Excel. Itâ€™s fast punk with the undeniable influence of the other desert bands like Fu Manchu and Queens of the Stone Age.

The four song opening salvo is about as relentless a musical pummeling as Iâ€™ve heard all year. The first two songs also appear to have Simpsons references, which definitely wins points with me. â€œNapoleon Blown Apartâ€ (season 12 episode 13) and â€œSave Me Jebusâ€ (season 11 episode 15) also happen to be ripping tracks. â€œJebusâ€ features legendary Kyuss singer John Garcia on guest vocals. Pygmie plays in Garciaâ€™s band and has a similar raspy howl. â€œMarshall Stacks and Alcoholâ€ and â€œWastoidâ€ turn up the intensity even further, and together could probably serve as You Know Whoâ€™s mission statement.

The instrumental â€œCobra Twistâ€ shows off the musical prowess of these three grizzled veterans. The guitar riffs are often fast, single note runs (rather than chords) paired with fuzzed-out leads and solos. â€œChinese Shoesâ€ is the angriest and most straight-up punk/hardcore song on the record. Itâ€™s a disgusted rant about the consequences of our lust for cheap, foreign footwear (and other crap). Seven plus minute closer â€œRecyclerâ€ is the albumâ€™s most ambitious and musically diverse track. It includes a dramatic piano intro and some clean (non-distorted) guitar licks. Itâ€™s a bluesy, soulful departure from the other ten harder-edged songs.

You Know Who is clearly a band that understands who they are and what they want to do. Lyrically, they alternate between sarcastic and antagonistic. Musically, they have a confident swagger that comes from combining the best parts of Black Flag and Black Sabbath. This record would be equally appropriate for skating a halfpipe or passing a hash pipe. Itâ€™s a celebration of everything thatâ€™s good about rock and roll. It feels familiar without being derivative, and flat-out kicks ass. Highly recommended.Â

The Fuck Off And Dies: Dear Liver