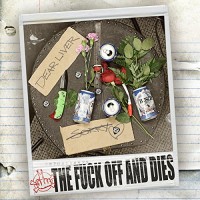 The Fuck Off And Dies

If Andrew WK is the king of partying, then The Fuck Off And Dies have to be the princes and their latest release Dear Liver more than proves that. Itâ€™s an album filled to the brim with partying and drinking pop punk anthems.

The band comes out swinging right away with the first track â€œA Good Day To Party Hard.â€ Though it starts out with a very laid back intro, the music quickly turns into a Teenage Bottlerocket-like tune where the guitar very hard-hitting power chord progression through out it. The lead vocals are very melodic, not only in this song, but also through out Dear Liver. And the backing vocals are soft, but also seem very like very carefully calculated harmonies. â€œA Good Day To Party Hardâ€ takes a interesting turn, with its outro when the band transitions it to a cover of â€œHeigh Hoâ€ (rewritten with lyrics about drinking) from Disneyâ€™s Snow White -- no, Iâ€™m not kidding this actually happens.

â€œAbsofuckinglutelyâ€ is the shortest track of the bunch. Coming in at not even sixty seconds long, it still manages to be one of the more unique songs on the record. Though it probably would not be considered a hardcore tune, you can definitely hear elements of the subgenre in it. The vocals are still very melodic, but the musicianship is choppy and disjointed during the short choruses. And with lyrics like â€œBecause life is too short wait for another an day or a better fuckinâ€™ time/ So when I ask you if you want to party tonight/ Did you reply ABSOFUCKINGLUTELY!â€œ it clearly still keeps true to the albumâ€™s over all partying theme.

At thirteen tracks the album as a whole does tend to get a bit stale when you listen to it from start to finish. Donâ€™t get me wrong, there are certainly some standout tracks, but this album does have its share of filler. Perhaps limiting it to ten tracks or so to keep us wanting more would have been a better way to go.

Still, this is a very solid and energetic album that just doesnâ€™t let up. The Fuck Off And Dies are definitely in the same vein as bands like The Copyrights, Masked Intruder, and yes, Teenage Bottlerocket. So if you are into those bands, chances are youâ€™ll be into this one, too.

666 copies of this album were pressed in three different kinds of picture discs (222 of each variant).