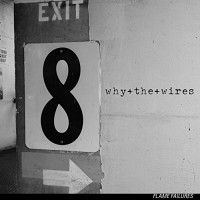 If youâ€™re looking for the next batch of crowd-pleasing punk anthems, this sure ainâ€™t it. But if youâ€™ve been left with a predator-sized hole in your heart since Bear Vs. Sharkâ€™s disbandment that even Bars of Gold canâ€™t fill, why the wires just might do the trick. Their Flame Failures LP walks the same line that the much-heralded Michigan group did in its prime: dense, intense and gloomy post-rock with an undercurrent of grim, jazzy desolation and discomforting dread. â€œPunchlist,â€ one of the albumâ€™s standout tracks, could easily fit in on Right Now Youâ€™re In the Best of Handsâ€¦ But where Bear Vs. Shark mix the spasms of power with the occasional big melody or goofy break, why the wires just press deeper into the potent, bizarre despair.

The backbone of this music is angular and nonconventional, allowing the bandâ€™s saxophone and accordion parts to hold down any semblance of melody to be found. Awkward time signatures and abrupt changes of pace litter the album, but often the band finds itself in a monotonous, dark groove that creates an addicting air of tension. The standard style is relentlessly chaotic and punishingly glum. Only at the middle of the album, on â€œSeizure Partyâ€, does the listener get anything resembling a break, but even those two quiet minutes have the slightest trace of tension to them.

Despite being listed just this year in AV Clubâ€™s Year in Band Names (under â€œWeird characters, punctuation, and capitalizationâ€), Ithacaâ€™s why+the+wires have been creating strange and dynamic music since 2008. According to a press release, the bandâ€™s median age is 37, and that surely shows. The closer, â€œTolls,â€ contains the lyrics â€œDementia has washed out all those young foolish fears/ Now I fall asleep singing along to the ringing in my earsâ€¦so long.â€ Itâ€™s a lyrically bitter and biting record, with songs that read like a wise-but-sour sage, spitting stories and talking shit. It shows a band that has come to appreciate reality and cast it off with a vicious toss.

Itâ€™s a tough, but rewarding listen. This is certainly not an album I find myself coming back to too often. Itâ€™s just too effective in its construction of an atmosphere of dread and unhappiness. But I appreciate the cohesive sound the band has created; itâ€™s certainly a sound you wonâ€™t hear too often. I hear Bear Vs. Shark are hinting at another reunion. With Flame Failures, I can wait for it a little longer.Â

The Fuck Off And Dies: Dear Liver