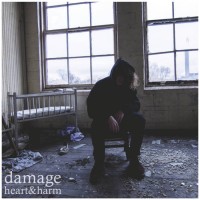 With a couple of releases on their belt, Windsor Ontario's Heart & Harm are no fresh faces to Canadian hardcore.

Taking influences from fellow Canucks Comeback Kid and Cancer Bats, they continue to prove that Canada is one of the front runners for the hardcore/metalcore scene.

Their EP Damage is a testimony to that fact with six hard hitting tracks worthy of any metalcore release. The debut self-titled track wastes no time to introduce the band to your ears and keep it glued to the speakers for the next couple of minutes and eventually, the whole length of the album.Â

Double bass blast beats from the drums and raspy vocals by lead vocalist Dan pave the way for the songs the whole recording and the lyrics seem to draw upon some dark topics including breakups, addictions, the end of the world and other not so bright experiences in life.

A track worthy of note is "The Self Corrosion of Man" which seems to include some sort of dual vocal performance in the verse that brings a really dark undertone to the song and emphasizes on the band sound and overall image perfectly. With lyrics such as 'I am broken, There is no hope for me' really describes the whole release in a nutshell and grasps the message of what this band is about.

"If Only" is the slowest song of the release but another top track, the mood of it is perfect for those late nights walking the streets on your own with the epic feeling it seems to emit from it's sound. The distorted guitar tones are unmatched with this song and lyrics 'If only we had the courage to be what we wanted to be' delivers what the song meaning is about -- again, dark and brooding tones but delivered exceptionally well.

Heart & Harm seem to taking all the right steps with their music and Damage is evidence of this. Who knows, maybe a solid tour with some of their peers might really put them on the map of the hardcore scene since their music does the job in the studio and I'm sure live performances enforce this.

For any fan of hardcore/metalcore, this is one you don't want to miss.