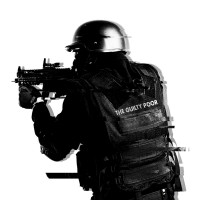 About a minute and a half into â€œStillborn Believerâ€, the first track off of The Guilty Poor, the first stanza of lyrics -â€œCan you teach me to live without being alive? / itâ€™s not the lies told/ itâ€™s the broken promisesâ€ â€“ give a pretty good indication of what to expect on Kennedyâ€™s first full length: angry, angsty, pissed off hardcore. That being said, The Guilty Poor isnâ€™t just another hardcore record trying to recreate Break Down the Walls or Cause For Alarm; there is a tonne of diversity on this record â€“ fast d-beat songs, metalcore influenced tracks, a little bit of noise rock, and a few melodic, instrumental pieces that act as transitions between the heavier songs. Kennedy pull their influences from a mixed bag and they do it well to create a thoughtfully crafted album.

Thematically, The Guilty Poor seems to project its anger and distaste at a variety of sources. Religion, contemporary work culture, the modern capitalist economic system, social mores and norms, and society in general are all targets of Kennedyâ€™s wrath. For example on â€œBirthriteâ€, obsession with social media and itâ€™s personification of narcissism is criticized in saying â€œAnother day, another chapter / you look so good in pictures / easy comes as easy goes /nothing below the surfaceâ€. Sure, one could say that all of these themes have been critiqued a thousand times before in punk and hardcore music (as well as other genres), but Kennedy manages to do it in a quite introspective way. For example, the lyrics â€œSo when does the heart become less valuable / less desirable, what gives it purpose, what gives it worth / so we blame the world and we teach our young / but can we have it both ways?â€ seems to acknowledge some of the deeper nuisances and complexities of problems that plague society.

The best part of this record is the amount of mood that Kennedy is able to create from begging to end. For example, the way that â€œEmpty Wombâ€ and â€œPromise Keptâ€ employ clean, melodic drawn out themes that eventually build-up and explode in the subsequent songs make the album more epic. The voice-over sampling that is scattered throughout is also a really nice touch and results in a greater, more holistic album. The Guilty Poor, the debut full-length from Montreal, QCâ€™s Kennedy is a hard hitting record that blends elements of hardcore punk, metal, and a bit of noise rock. The production on this LP is really tight, but not too polished; it still manages to sound like a classic raw, hardcore record without trying to merely replicate the classics.