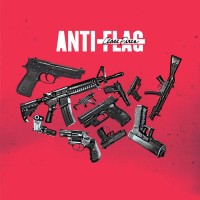 Anti-Flag got going in earnest in 1993. (Although they existed in fits and starts before that.) In 2013 they celebrated 20 years as a band by releasing Document of Dissent. Itâ€™s a 26-song collection that covers their entire career and deserves a spot in your record collection. (If you donâ€™t already have the individual albums.) They also put out a year-long subscription series called 20 Years of Hell. The 7-inches were limited to 500 copies each and featured a re-recorded Anti-Flag song on the A-side, and various A-F Records artists on the B-sides. These little records served to make some out of print material available again as well as to promote their label. Cease Fires collects those 12 reworked Anti-Flag songs plus two previously unreleased tracks.

The newer songs, â€œCoward In My Veinsâ€ and â€œThe New Jim Crow,â€ lead off the album. They sound like, well, current era Anti-Flag. Which is to say that itâ€™s similar to anything from For Blood and Empire or later. Itâ€™s catchy, slickly produced, thoroughly modern sounding punk rock. The whole album has a high-end production that almost all of the original recordings lacked. Some of these tracks, like â€œKill the Richâ€ and â€œThe Consumerâ€™s Songâ€ lose a bit of their previous raw charm. Others, like â€œTwenty Years of Hellâ€ and â€œNo Future,â€ benefit from acoustic guitars, tighter harmonies and even horns. Thereâ€™s quite a lot to like here. â€œBring Out Your Dead,â€ â€œThe WTO Kills Farmers,â€ â€œThe Ink and the Quill (Be Afraid)â€ and â€œThe Ghosts of Alexandriaâ€ are all stand-outs.

Cease Fires sounds like a cohesive LP rather than a compilation. Maybe thatâ€™s the point, but itâ€™s likely many die-hard fans would rather have a re-mastered collection of the original recordings. Anti-Flag have always been political, and this is no exception. Unfortunately, like a lot of the material theyâ€™ve released over the last 20 years, this can come across as utterly humorless. That being said, Anti-Flag has become one of punkâ€™s elder statesmen, and they have earned a certain amount of respect. While this album is very solid, it will mostly appeal to already devoted fans. Casual fans would be better off picking up a copy of Anti-Flagâ€™s other 2015 release, American Spring.

Ignite: A War Against You