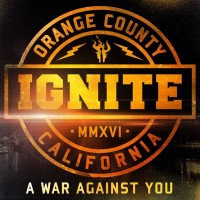 Ignite have never been afraid of raising their voice and speaking up. A War Against You takes this to a whole new level given the current state of the world and brings the band back for a new run that sees them as impassioned as ever. More so, it reunites a group of brothers that missed making music together. This record takes a heavy stance on several sociopolitical issues and continues to show why Ignite were always one of the best when it comes to mixing the melodic punk/hardcore genres together. To call this record their biggest mission statement would be really short-selling it.

It matches right up with Our Darkest Days, which stands out as their best body of work to me. With all band members bringing back so many experiences from other bands (including vocalist Zoli Teglas' impressive stint with Pennywise), it amazes me how fresh and relevant they feel while bringing forth their emblematic sense of SoCal punk authority. Teglas feels as unrestricted and free as ever with his soaring delivery on the mic (and fuck, I'm still hoping he does a full-blown power-metal record). There's a lot of Euro-metal flavour brought to the mix as well while songs such as the hardcore-based "This Is A War" stretches his vocals to the limit. He expresses even more emotion on the melodic punk grind a la "Begin Again" and "Nothing Can Stop Me", the latter for a friend who battled cancer -- which shows that it's just as personal an album as it is a political missive. You're immersed in crushing riffs, speedy hooks and a barrage of melodies that'll make your head spin.Â

A War Against YouÂ reminds me of the last H20 record in its positive nature and upbeat vibe while digging in on "Where I'm From" which feels like it came off the last Millencolin album, but much more aggressive. To be honest though, there are too many good tracks to detail but by the time "Work" rolls around, you'll be neck-deep in Teglas' message of immigrants and refugees and more so, ever-grateful they decided to drop this album and kick the year off in style. There's a lot of energy and attitude from a band that never needed to prove anything because it all flowed so organically when they took the stage with a variety of acts. They stick to their old guns but add enough contemporary flair to keep things mixed up and pushing on with the years. The dedication's there. So too is the direction on yet another gem of a production from Cam Webb. Â Ignite are speaking volumes, screaming for change and it's a pleasure to report that the fire's still burning.