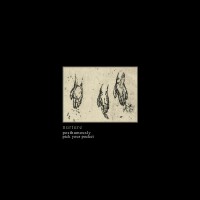 Nurture is a hardcore band based out of Athens, Georgia. They first came on my radar when they appeared on a split with now defunct Atlanta Georgia hardcore cohorts Antpile. The 3 song collaboration, released in April 2014, feature â€œMid-fallâ€ and â€œYour Songâ€ by Antpile and â€œI'll Bathe You in Jamesonâ€ by Nurture. Overall Nurture's effort on this release was underwhelming, the recording quality was less than ideal and the song writing full of ideas but fragmented. That being said I was titillated enough to keep an eye on them.

Last year, Sasha Schilbrack-Cole (Drums), Terence Chiyezhan (Guitar) and Dionnet Bhatti (Bass and Vocals) released Nurtureâ€™s latest effort. Their two track digital release featuring songs â€œPosthumouslyâ€ and â€œPick Your Pocketâ€ is their best effort today. Nurture is a noisy chaotic band in the vein of 108, Sparkmarker and 400 Hundred Years. Their sound is dynamic, one second its guitar laced uproar that sounds like a brawl outside your window and on a turn of a dime they will bring down the volume to a whisper. I canâ€™t determine if I like this release but Iâ€™m intrigued to see where these guys take their sound.

Itâ€™s not the most original sound they are trying to harness but with each release their song writing is getting more interesting and their implementation of the songs more precise. Iâ€™m interested to see where they go and what chances they will take on their next release.

Ignite: A War Against You