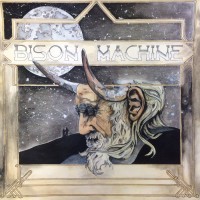 I seem to have fallen down into a stoner-metal rabbit hole, and I must say, Iâ€™ve been enjoying it. My most recent discovery is Detroitâ€™s Bison Machine. I decided to check them out when I saw they were doing a short Midwestern tour with Against The Grain, another favorite of mine from Motown. After a pair of long EPs in 2013 and 2014, Hoarfrost is Bison Machineâ€™s first full length. With these type of bands, it can be hard to determine where EPs end and LPs start. The songs can be really long, and a four track EP might run a half hour. Hoarfrost is six songs that stretch out to nearly 37 minutes.

The information available about Bison Machine is pretty cryptic, and Iâ€™m not even sure how many people are in the band. Musically, itâ€™s driving hard rock that would almost certainly appeal to fans of bands like Fu Manchu and The Sword. Itâ€™s an idealized version of the fuzzed-out sounds of the 70â€™s. The guitar tones of the 70â€™s were rarely as chunky and overdriven as they are here. â€œCosmic Arkâ€ is the concise and catchy four minute opener. The vocals can get into a high register that remind me a bit of a young Jack Bruce. (He was from a really great band called Cream. Ask your dad.) â€œViking Handâ€ is the other four minute song and it manages to maintain a constant intensity. Itâ€™s full of furious riffing and scorching solos. â€œSpeed of Darknessâ€ is nearly six minutes long and has a heavy, sped-up Black Sabbath vibe.

The other three songs are much more challenging. Six and a half minute â€œOld Moonâ€ starts out heavy, then alternates between quieter sections and intense riffing. Seven plus minute â€œGamekeeperâ€™s Thumbâ€ begins with a mellow bass line and continues to build over its entire length. â€œGiantâ€™s Coffinâ€ takes the award for longest track at nearly nine minutes. It sometimes conjures up memories of Led Zeppelinâ€™s more trippy, psychedelic stuff. Bison Machineâ€™s lyrics have a tendency to get a little too far into Dungeons and Dragons/JRR Tolkien territory for my taste, but I know thereâ€™s a lot of people into that kind of thing. Overall, Hoarfrost is a really solid record, and I look forward to hearing these songs live.Â