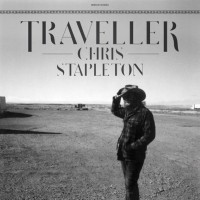 Country music was once gritty and real: stories of weary travelers down on their luck and singing about it. But something terrible happened. Like many genres before it, country music succumbed to pop radio, and the results got as bad as â€œCruise (Remix).â€ Then in early November, there was a change for the better. Justin Timberlake took the CMA stage with a long-bearded cowboy and everyone took note. It wasnâ€™t forced radio-friendly country. It was genuine.

That cowboy was Chris Stapleton, who actually put his debut albumÂ Traveller out in May. But, boy, did the Timberlake approval do him wonders. See, Stapleton isnâ€™t a fresh-faced newcomer. The thirty-seven-year-old rocker is a road warrior and an established songwriter, and this album is no doubt inspired by the toll his previous life has taken on him. Half of the songs are about never settling down. Others reflect on his family back home. Most involve whiskey. No matter the subject, when he cries, his sweet, southern voice gets his point across.

Stapleton has proven his writing chops countless times before. Now, he gets to showcase his own work. Traveller has a little something for everyone. Thereâ€™s the â€œTennessee Whiskeyâ€ cover (the song he performed with Timberlake), which will find pop country fans trying Â to name-drop Chris Stapleton for street cred. â€œParachuteâ€ is a full-blown anthem, by any standards. Thereâ€™s the back-to-back punch of â€œMore of Youâ€ and â€œWhen the Stars Come Outâ€ which are truly beautiful love songs. Then thereâ€™s the slower, sadder stuff like â€œWhiskey and Youâ€ and the title track that delve deep into his â€œbeen there, seen it allâ€ attitude. The range proves him a capable songwriter in the truest, clearest sense. His messages are straightforward, brought to life by excellently crafted hooks.

Nothing is clearer than Stapleton's authenticity. Heâ€™s a happily married man who enjoys his liquor. And, currently, his career is on a giant upswing. But none of that seems to matter to him. He plays hard like he always has, like all that matters is the music. And he sure as hell doesnâ€™t care how clichÃ© you or I think that sounds.

Whether or not country is your genre of choice, itâ€™s hard to knock Stapletonâ€™s ability or skill on Traveller. Hopefully having someone soulful like him seep in modern music will do it some good and inspire wandering cowboys to write from the heart instead of the frat party.Â

The Briggs: The Briggs [7-inch]