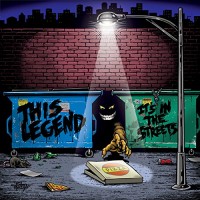 This Legend is Chris Castillo (Vocals/Guitars), Ben Harper (Lead Guitar), Steven Neufeld (Bass/Vocals) and Longineau Parsons III, aka LP (Drums). I got to see this band play live, last November, when they opened for Lagwagon on their North American Tour. Not knowing any of their music, I took in their performance with no preconceived notions or punk chauvinism.

The four piece laid down an imperious performance. Harper willfully jumping around while Castillo and Neufeld sang their descants seamlessly. LP, on the drums, is simply a beast. Not to take away from his band mates his performance stood out for the whole night.

Alright boys, I feel what youâ€™re throwing down but howâ€™s the album?

In The Streets is the bandâ€™s first release on Cyber Tracks, a label owned by NOFXâ€™s El Hefe and his wife Jen Abeyta. Twelve songs, 37 minutes of high energy pop punk that does represent the band justly. The album discerningly showcases LPâ€™s drumming prowess while not overtly relying on it as a gimmick. Appropriately polished, In the Streets attests that Castillo is a talented mofo with good pipes. Songs â€œHoliday from Crazyâ€ and â€œLife Pushes Hardâ€ clearly demonstrate that the lads know how to write catchy radio friendly ditties. That being said, I more enjoyed the performances captured on â€œRegretsâ€ with its Hey Mercedes-like guitar play and the ending track â€œJosh Lights a Fire.â€ These tracks display the bands musicianship and give a listener a hint of what makes their live show worth experiencing.

This Legendâ€™s live show is where this band aptly shines although if youâ€™re busy lives deprive you from enjoying sound waves check out In the Streets.

As You Were: Vol. 4: Living Situations [comic]