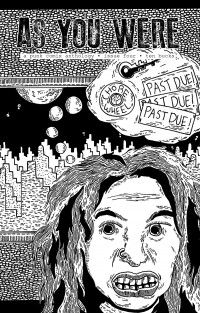 The fourth edition of Silver Sprocketâ€™s As You Were series, once again brings together comic (and comix) creators to flex and contrast their style against each other. The newest issue, which was curated by Sprocketâ€™s Avi Ehrlich and Mitch Clem, focuses on the theme of â€œLiving Situations.â€

As with previous issues, the comics anthology/mega-zine loops returning heroes with newbies. Liz Prince brings her effortless talent her wherein she describes living in a haunted house- and thatâ€™s not a gag, she seems serious about the topic. As usual, Princeâ€™s story telling is inviting and maybe a little twee, but not so much so that itâ€™s offputting. Somehow, her work is both quaint and progressive. Unlike previous editions, though, Prince stretches her styles and experiments with pencil textures resulting in some of her most noir-work to date.

Fellow As You Were veteran Ben Snakepit spins his usual punx tales of drinking and hanging out, but where such a gambit could come off as affected, Snakepit seems genuine. He at once congratulates himself for being such rapscallion and condemns his behavior. Itâ€™s a tough trick to pull off, but Snakepit, with his decade of punx-tales, comes off like a really good story teller in your favorite dive bar.

Meanwhile, the book features some new comers. Will Laren and Lindsay Ann Watson stretch the conventional format of what a â€œcomic,â€ making their work more as a series of individual works then word balloons connected via borders. Similarly, the stories range from the usual stories of hanging out a punk house to the acid-trip odyssey of Joshum, which features three-eye elephants warring with zombies.

More than ever before, the new issue makes use of presenting creators in different stages of their developments. Some creators seem to still be learning the rudiments while pushing their own style through their first few steps, while artists like Liz Prince step in and bust out their A-Game in professional ease, while others, like Wyeth Yates with his Sci-Fi fantasy, seem to be pushing their own established style to the limit. The stratagem works well, giving each story a true individuality, as well a range of emotion and investment. No matter the range of technique and meaning, all these artists â€œbelongâ€ in this wide-raging, and frequently compelling, volume.

As I said once before, I do wish that Ehrlich or Clem, or both, would pen some sort of a foreword. Why is the topic of â€œLiving Situationsâ€ worthy of study? Why were artists chosen?

Despite that, this volume is not only a worthy addition to the catalogue, but it is a usually fun, sometimes sad, and once in a while mindfreak book. Not everyone here is at the same level, and thatâ€™s kind of what punk is all about. Those with a high degree of technique and refinement often dazzle with their skills, but those with raw, blunt power have a few tricks up their sleeves (or pen cases), too.

This Legend: In the Streets