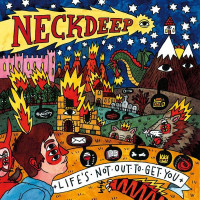 Neck Deep, these four Welsh pop-punkers, put together a near perfect album with Life's Not Out to Get You. Now itâ€™s not near perfect in a sense that it exudes exceptional musicianship or is lyrically advanced. Quite the opposite. Lifeâ€™s Not Out To Get You is predictable and basic, but delivers over and over for those that like heavy power chords, creative hooks and big, memorable choruses. There are few duds and everything is jam worthy. Itâ€™s exactly what you hope for after slapping down ten bucks for twelve tracks.

Neck Deepâ€™s second full-length album opens with â€œCitizens of Earth.â€ Donâ€™t waste your time with this awkwardly angst, train wreck of a song. It's the album's one mishap. "Threat Level Midnightâ€ is more appropriate introduction to the album, with an anthem-like guitar riff mixed with a chunky baseline all backing the bouncy vocals of singer Ben Barlow. Just for reference, he sounds like a cross between Derek Sanders of Mayday Parade and â€œSoupyâ€ from The Wonder Years.

The album continues with track â€œCanâ€™t Kick Up The Roots.â€ Itâ€™s the albumâ€™s first single, and probably the best track. With a big sound, pace variance and stand-out lyrics â€œThis place is such a shipwreck, but this shipwreck, it is mine,â€ Lifeâ€™s Not Out To Get Youâ€™s third track is worth repeated listens and a highlight song for its creators.

â€œKali Maâ€ keeps up the albumâ€™s momentum, building nicely from verse to chorus. â€œGold Stepsâ€ turns the album up a notch, with a first verse paced by double-kicks before a brass chorus barks the albumâ€™s signature line â€œAnd lifeâ€™s not out to get you, despite the things youâ€™ve been through.â€ Barlow practically raps the second verse before aggressive finish underlining his delightfully snotty vocals.

â€œLime St.â€ finishes off a five-song streak of quintessential, and maybe even too-typical, pop-punk. Fans are pointing out the lyrical similarity between the first verse and Blink-182â€™s â€œFeeling Thisâ€- â€œjust need to see you smile, or maybe stay awhileâ€ compared to Blinkâ€™s â€œlook to the past and remember her smile, maybe tonight I can breath for awhile.â€ Blink inspired or not, itâ€™s a great track with an aggressive finish.

â€œSerpentsâ€ is a bit dark, echoing sounds of old-school Hawthorne Heights. You canâ€™t make it through a pop-punk album without some song about the band whining about leaving their hometown and chasing their ambitions. Thatâ€™s what â€œThe Beach Is For Lovers (Not Lonely Losers)â€ is for. â€œDecemberâ€ is the token slow jam, with a lovey-dovey chorus that will earn plenty of YouTube Plays.

â€œSmooth Seas Donâ€™t Make Good Sailorsâ€ is one of the fastest tracks on the Lifeâ€™s Not Out To Get You. Itâ€™s loud and the dual chorus is one of the high points of the album. There are a couple awkward screams and the chord progression is a little messy. Think New Found Gloryâ€™s last couple albums for an idea of how it sounds. â€œI Hope This Comes Back To Haunt Youâ€ starts slow before ultimately becoming one of the albumâ€™s biggest tracks. â€œRock Bottomâ€ is a nice capper with an opening base line almost identical to that of Blink-182â€™s â€œMan Overboard.â€ Ultimately, the song carries out Lifeâ€™s Not Out To Get Youâ€™s overall theme of embracing hardships and letting go of negativity.

Neck Deepâ€™s second album is a proper ode to the genre. It reverberates a sound that got lost as many pop-punkers assimilated to the Indie scene, or tried to dig their feet into the post-hardcore movement. This album is probably eight or nine years too late, which is perfect for anyone looking to feel nostalgic for about forty minutes, or just enjoy some really good music. What is most impressive is how the album preserves this sound while at the same time making each track stand alone. That is the calling card of good pop-punk, doing a lot with a little.

Fans of the genre will love this album. It is everything they have been waiting for and the best addition to your pop-punk collection since The Wonder Yearâ€™s Greatest Generation. As much we might like the flag bearers, itâ€™s the founding fathers - the Green Days, Blinks and NFGs- that we want to hear. Fans want to listen to Dookie or Enema of the State again like their new. An impossible wish that feels somewhat fulfilled by Lifeâ€™s Not Out To Get You.

As You Were: Vol. 4: Living Situations [comic]